They are the unusual and winning combination of Chris's driving guitar,Emily's incisive fiddle playing and Jude's lyrical oboe coupled with great full on vocal harmonies.

The Isambarde story begins in late 2001, when Chris Green (vocals, guitar), decided to form a band. The only slight problem with this was the fact that he didn’t really know anyone within twenty years of his own age who shared his taste for traditional English folk music. A lonely and brief solo career beckoned!

Then as luck would have it, Chris got involved at very short notice in a musical theatre production at the Alexandra Theatre that shall remain nameless, as it was a bit of a nightmare for all concerned. It was in these stressful circumstances that he met the show's orchestral manager and more importantly pit oboist Jude Rees (oboe, vocals), a fellow folkie reared on Steeleye Span, the Albion Band and other alumni of the 60's and 70's folk revival. She had just completed an MA at Birmingham Conservatoire and leapt at the chance to do something different from the music traditionally associated with the oboe.

Chris had met Emily Sanders (vocals, fiddle) briefly at the Bridgnorth Folk Festival in 1997, but being Chris had promptly lost her number! They met again by chance at the Boggery Folk Club in Solihull in early 2002. Emily had been a regular fixture on the Staffordshire circuit since the age of 12, but was not involved with any band on a regular basis, so the other two lost no time in recruiting her talents and formidable repertoire of traditional songs and tunes.

Isambarde were now a trio and played their first gig to an appreciative audience at the Styvechale Folk Club, Coventry in April 2002. Over the last few years they have played clubs and festivals all over the country, collecting songs, tunes and friends along the way.

Isambarde’s music is a powerful blend of traditional and contemporary folk songs, taking the English tradition forward into the 21st century.

And at Sale Folk Club they were absolutely magnificent with a fantastic range of songs and music many chosen from their fine collection of CDs. Their selection ranged from the cheeky "My Thing Is My Own" to "Dick's Maggot" to the classic "Lowlands Away" and "Annan Water" all delivered with tremendous verve and panache. 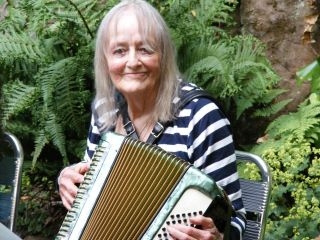