and KISS THE BLARNEY 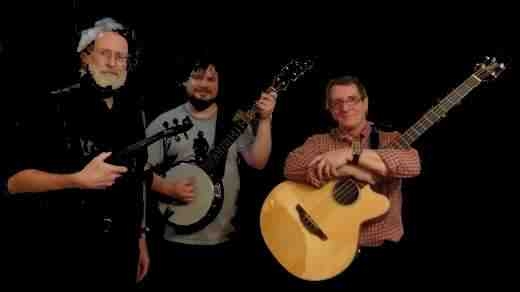 The band is led by the singing of John and Arthur, supported  by John's  bass and guitar, ornamented by Arthur's fiddle, melodeon, mandolin, flute, accordion and sax and driven mightily along by Robbie’s guitar and banjo.  Oddly enough, we don't actually play all these instruments at the same time - a certain amount of pic'n'mix goes on which adds even more variety to the show! As well as the songs, dance tunes and airs drop in and out of the set - the band has a history of playing for ceilidhs and barn dances as well as shows where the songs predominate.
Belfast-born John was with Murphy's Marbles for 4  years, playing Tramore and Dungarvan Irish music festivals and the  famous Cheltenham Irish Week in the "Guinness Village" at the race  course for 3 years running. He played in the backing band for Sean Cannon of the  Dubliners when on tour. Both he and Arthur worked with the Cheshire ceilidh band Peak Folk for several years providing the music for ceilidhs and barn dances  where Arthur, as well as playing melodeon, called the dances in his own inimitable style.
Robbie plays guitar, banjo, mandolin and various other instruments with strings. This may lead to the occasional surprise, to the rest of the band as well as to the audience, but we savour creativity in all its forms..