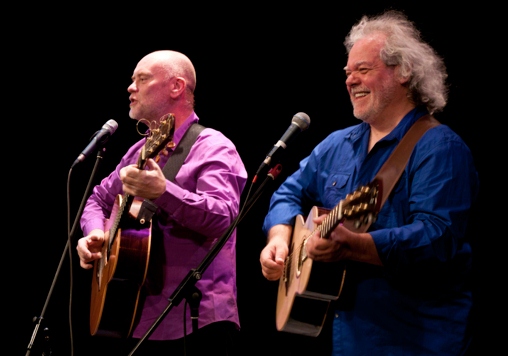 - the return of one great with another great!!!

Songwriter Huw Williams and multi-instrumentalist Maartin Allcock first met on a Fairport Convention tour bus in 1995. Huw went on to conquer the British folk scene with his singing partner Tony Williams (no relation) until calling it a day in 2002, since when Huw has been a regular contributor to BBC Radio 4. Many of Huw and Tony’s songs have been covered by artists in Europe and America including Rosemary’s Sister and The Summer Before The War, both also performed by Fairport Convention.

Maart went freelance in 1997 after leaving Fairport and moved to Snowdonia in 2000. Since then he has continued his session career which now includes over 200 albums from Robert Plant to Beverley Craven, and made a name for himself as a record producer, especially in Welsh folk music, and touring with Nashville songwriter Beth Nielsen Chapman, fiddle maestro Dave Swarbrick, Blue Tapestry, John Wright Band, Miranda Sykes Band and many others. He also works in Italy with Italian prog-rock band OAK and as a trio with OAK frontman Jerry Cutillo and Richard Sinclair (Caravan, Hatfield and the North).

Now the two have come together with a performance of stories about life on the road, soundchecks and how and why some of the songs were written. An evening of foot tapping tunes and beautiful songs with anecdotes that will both captivate and make you laugh.