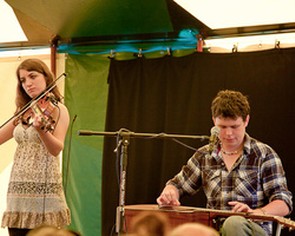 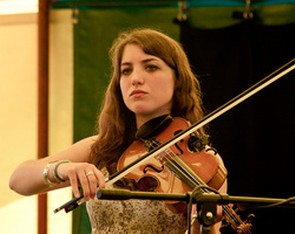 BBC Radio 2 Horizon Award nominees Katriona Gilmore & Jamie Roberts combine astounding lap-tapping guitar, fiery fiddle and their trademark harmonies with considerable songwriting talent to make a truly distinctive sound. Since releasing their debut album 'Shadows & Half Light' in 2008 (proclaimed 'one of the finest contemporary folk albums in recent memory' by FishRecords.co.uk), Gilmore and Roberts have been wowing audiences across the country with their unassumingly confident displays of instrumental technique. 2010 saw the duo complete a nationwide tour in their own right, land the coveted opening slot on Fairport Convention's 2011 Winter Tour, and release their much-anticipated second album, 'Up From The Deep'.

The new album is a major creative leap forward - self-produced, mixed by Andy Bell and mastered by Megson's Stu Hanna, Up From The Deep is fresh and innovative yet deeply rooted in tradition.
You can definitely hear our individual influences coming out more than on our previous album says Katriona. I've been listening to more bluegrass, and Jamie's really got stuck into the English tradition.These two ends of the spectrum, the English and the American, blend surprisingly well. Nothing At All, a traditional song collected in Dorset, sounds like it could have been written for pedal steel! The contributions of PJ Wright (Little Johnny England) on pedal steel and Cia Cherryholmes (of Grammy-nominated Nashville band Cherryholmes) on banjo deftly enhance the transatlantic feel, and the sound is augmented by Jack Theedom (double bass) and Dom Howell (percussion), both veterans of the duo's first record.