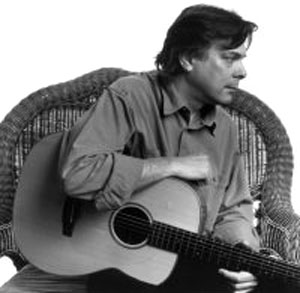 Carl followed Eric and he sang Hello Hans, his own All at Sea and Jez Lowe's Old Bones. He was very confident and made a few amusing remarks which entertained the audience. He was totally calm and collected despite being stopped mid-way through his first number because his guitar was disconnected.

Richard was equally as confident and sang The Bellringing, Old Brown's Daughter, and Yarmouth Town. He did really well considering it was his first performance in a warm-up capacity.

Pepper Street were the final warm-up and Richard took over the sound controls whilst Mick and John were on stage. They sang City of New Orleans, Orson Street Girls, Ten Thousand Miles and Arran More.

A little-known folk singer who once complained that success was threatening to ruin his career has finally received a letter of reassurance sent to him by John Lennon nearly 40 years ago.
By Laura Roberts Published: 6:25AM BST 16 Aug 2010

John Lennon signed the letter from him and Yoko Ono just months after The Beatles split up in December 1970 Photo: REX
The former Beatle wrote to Steve Tilston in 1971 after reading an interview with him in a music magazine.
In a note now revealed in public for the first time Lennon told the young musician not to worry about accumulating wealth because it wouldn't change the important things in life.
Lennon signed the letter from him and Yoko Ono just months after The Beatles split up in December 1970.
He sent it to the offices of now-defunct ZigZag magazine but never reached Tilston until a collector seeking to verify the letter first contacted him five years ago.
Lennon, then 30, had read an article in which Tilston, then 21, had claimed that becoming wealthy might damage his ability to write powerful songs.
Addressing the songwriter and the journalist who interviewed him, Richard Howell, he wrote: "Being rich doesn't change your experiences in the way you think.
"The only difference, basically, is that you don't have you worry about money - food - roof etc. But all other experiences - emotions - relationships - are the same as anybodies.
"I know, I have been rich and poor and so has Yoko, (rich - poor - rich). So, whadya think of that. Love John and Yoko."
He even included his home telephone number.
Yoko Ono, 77, confirmed that she remembered Lennon, who was assassinated aged 40 in 1980, writing the letter.
She said: "'John reflected his moods of that moment in his writing.
"This one is very special because he was writing to another musician, didn't want to sound preachy, so made his handwriting oddly rough and artistic, calligraphically. It's nice to see this one after all these years. I love it."
Lennon included a message of support for the co-editors of Oz magazine who were on trial at the time facing charges of conspiracy to corrupt public morals. They were acquitted later that year.
John Lennon and Yoko Ono helped write the song God Save Us by the Elastic Oz Band to raise funds and gain publicity.
Tilston, meanwhile, has gone on to record more than twenty albums during his career and counts Rod Stewart among his fans.
The 60 year-old has just published a novel and will mark 40 years in the music business with a concert at St George's hall in Bristol next month.
He said: "I feel it was a rather brotherly letter really. Not antagonistic, just offering words of advice. If I had received it all those years ago my young self would definitely have rung him. I felt rather angry to start with to think that someone had just sold the letter rather than passing it on to me but you have to let these things go."
The letter, which is estimated to be worth around £7,000, is currently in the hands of an American collector.
Tilston believes it was sold on after Lennon sent it to ZigZag's offices in London.
He said: "I didn't hear about it at all until out of the blue about five years ago, when an American chap got in touch with me and said; "Are you the Steve Tilston that John Lennon wrote to?
"That's when I finally saw it - 34 years after it was written."
Tilston admitted that, in the end, he has never had to worry about whether extreme wealth would hamper his creativity.
"I said something about how becoming rich beyond the dreams of avarice might have a detrimental affect on my songwriting," he said. "Sadly I was never really able to test this theory out, but Lennon, who clearly had, put me right."