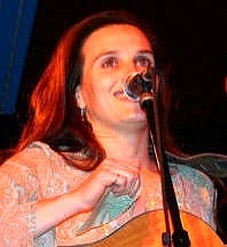 A Fabulous evening was spent with Fossie who went through the whole range of her repertoire from Piaf to Brel to jazz to folk and enthralled a near capacity audience after a brilliant opening from Cockney Eric Carl Corbett and Mick & John aka Pepper Street.

Flossie Malavialle is a French singer who started getting involved in the British folk scene in 2000-2001 while she was on a teacher exchange in the North East of England.

How it all started... After 12 years of teaching English full time in secondary schools in the South of France, she decided to apply for a job as a French teacher in England, as she felt it would boost her English to live abroad for a year. She got one in Stockton-on-Tees and was living in Darlington at the time (great part of the world to improve your English, like ).
She had also been singing for years in France before that and that's why she found it quite natural to turn up at the Darlington folk club one night to meet the locals and sing a song... She didn't realise then that this was going to be the beginning of a new life in England for her.

Now? After her exchange was over, she went back to France for a year but she missed the life she had had in England so decided to come back! She is now based in Darlington, does some supply teaching in the area when needed but is mainly focused on her singing. She has released 8 albums since September 2002, Thistledown, Mistral (March 2003),

Flossie sings Piaf (May 2003) , Making up the miles in December 2004, The Wilderness Years in November 2006, Flossie sings Brel in November 2007, What a wonderful world! (June 2009) with pianist Michael Mulroy, which is mainly a collection of jazz standards alongside some very famous modern classics and The Tour Collection (September 2009) which release coincides with the Show of Hands County Towns Tour starting this month.

What sort of songs does Flossie sing? Her repertoire is very open as she likes all sorts of different music genres. Her songs include famous numbers, including Allan Taylor's Roll on the day, Kieran Halpin's Making up the miles, Colum Sands' The child who asks why, Starrett and Laird's John Condon but also Edith Piaf's eternal favourites No regrets, La vie en rose... or Jacques Brel's Amsterdam and Ne me quitte pas... She also loves songs full of energy or, as she calls them herself, full of vavavoum such as Bonnie Raitt's Road's my middle name, Kris Kristofferson's Bobby McGee (Janis Joplin way), Marylin Middleton's Wild Women etc... There's also space for lovely ballads such as Keith Pearson's More hills to climb or Frank Sinatra's Strangers in the night as well as jazzy tunes like Let's fall in love, Misty or Fly me to the moon.

See Flossie perform live on and put Flossie in the search.