Another great time was had by the lucky 11 members of SALE FOLK CLUB who went down to Betws-y-Coed and stayed in the converted Catholic Church, not much call for Catholicism in Wales, for a self-catering New Year. Joan, Jackie, Terry, Kate, Rob, Elizabeth & Robin, Sue & Ed and Heather & Don were joined for all activities by Heather & Derrick from a neighbouring B&B.

Elizabeth & Robin first entertained us with a lovely Soup starter followed by Salmon en croute dinner and Rob's apple pie and much singing and general craic later we fell into bed.

Rising on New Year's Eve to Ed's magnificent full English breakfast we were well set us up for the first game of the day. This was called choose your driver or hunt the reservoir or find each other in the middle of Snowdonia without a compass, map or GPS and mobile phone signals. Half went to Afan Crafnant and they unbelievably bumped into the other half from Llyn Gerionydd and prizes were given to those still speaking to each other. Evening was in the hands of Heather & Don for melon starter and a full turkey dinner with Sue's Pavlova Bomb to finish. Once replete a three-day party game was started with prizes eventually being won by everyone. Of course the big build up was to midnight with Auld Lang Syne and some dancing eg the Gay Gordons.

A GREAT MEAL TOGETHER

New Year's Day started slower but with Ed's excellent cuisine inside us we later explored Betws-y-Coed in light rain partly for coffee and partly in the interests of detox before returning for late afternoon mulled wine. A great Pate started evening dinner followed by Kate's special AC/DC Lasagne (meat or veg) and Terry's monster fruit salad. More jollifications ensued with some great games by Sue then an earlier night.

The last full day was Monday and the Ed Special was followed by a trip out to Rhos-on-Sea and a promenade walk in the sunshine would you believe. Llandudno on the way back and everyone returned for mulled wine and another super meal of chicken casserole and apple crumble this time provided by Joan & Jackie. And still there was fuel in everyone's tank for a few more songs, more of Ed's quizzes and loads more craic. Magic !! 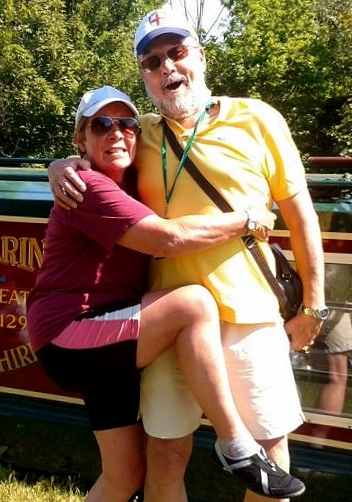