Not nice weather but excellent inside Sale Folk Club as PETE openly declared you bring out THE BEST IN ME followed by PHIL who dedicated MARTIN to Martin not surprisingly and BANJO JOHN with a duck joke and a song by Paul Robeson. SUE was next with her stick dulcimer and THE BALLAD OF LUCY JORDAN whereas PAUL was chasing the CANDYMAN leaving CARL to confess he was ALL AT SEA with his own song and true story of a female matelot. Then BRIAN had us Googling THE VERY THING THAT MAKES HER RICH WILL MAKE YOU POOR as poor KAMRAN was out SELLING ICE-CREAM IN THE AUTUMN but ED & SUE didn't care as they went off to LANNEGAN'S BALL. With complete aplomb GEOFF then amazed with his rendition of OUR HOUSE (Crosby, Stills and Nash) as a solo DON sang YOU WILL BE THE LIGHT for the absent Heather as BANJO JOHN shot off on the MIDNIGHT SPECIAL. Down in the darkness CARL was next digging for the BLACK DIAMONDS of Jez Lowe but PETE KING came through the door with his latest new song which was certainly not the POISON that it was about. Coming up to the break SUE was soon off with BLACK JACK DAVEY and PAUL sang a favourite of his JACKAROO before RICHARD patriotically celebrated OH, ENGLAND.

With much craic the interval raffle saw the Red wine go to Jackie, the Room fragrance diffuser go to Alan, the Biscuits temporarily go to Martin before he handed them round and the CD go to Paul. Starting the second half PETE urged us to say GOODBYE TO THE OLD as BRIAN again surprised us with the song THROUGH THE MORNING THROUGH THE NIGHT and ED sang in praise of IRELAND'S GREEN SHORE. Another favourite song then came from KAMRAN with the DEAD SHRIMP BLUES as GEOFF was all romantic with HE'LL HAVE TO GO and DON banded up with PAUL and ED for a GALWAY GIRL. Then PHIL surprised with SWEET BABY JAMES as did PETE KING by adopting the ukulele for his SIMPLE SONG before RICHARD strolled along to THE EIFFEL TOWER. Responding to clamour from the audience CARL treated us to SISTER JOSEPHINE while PAUL had the BLUES IN A BOTTLE before SUE & GEOFF set out on the CITY OF NEW ORLEANS and ED sang about NANCY. Soon PETE was KNOCKING ON HEAVEN'S DOOR whereas to PHIL it was WEDNESDAY MORNING 3AM which led KAMRAN to ask DADDY, WHERE YOU BEEN SO LONG? Finally in response to a great night DON had us all singing away with SONNY before RICHARD said sadly that we should all soon be FAR AWAY FROM HERE as we headed for the door. Top drawer! 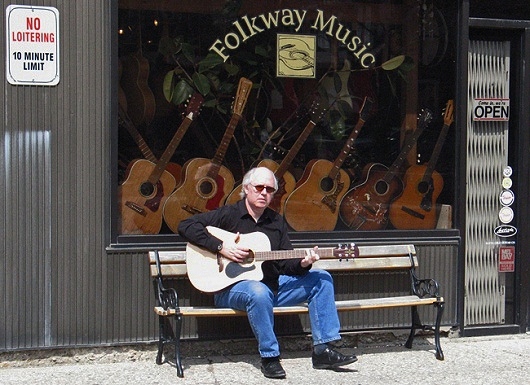