A fair few performers arrived for hosts PAUL & ROBIN to coax into great entertainment for an even bigger audience prompting ROBIN to kick off with the MULL OF KINTYRE followed by GEOFF with BRIGHT LIGHTS TONIGHT having had his foot free from the plaster cast which immediately made GRASSROOTS break out into BRINGING ON BACK THE GOOD TIMES which Geoff fully appreciated. PETE then declared that the HEART IS LIKE A WHEEL just as JO was off to SCARBOROUGH FAIR with KEVIN swearing to BE A PIPER TO THE END all a cappella. Then how great it was to see and hear CARL back again and on form with Jez Lowe’s THESE COAL TOWN DAYS, a cappella again, followed by SUE with her UKELELE PARODY OF HALLELUJAH and DAVE SARGENT with his own children’s song BEDTIME. On the contrary BRIAN said I DON’T WANT TO TALK ABOUT IT but ROB was only too happy to treat us to FRED THE SLUG to which ANN replied ALL MY TRIALS LORD will soon be over as ARTHUR hove into view with his BLUE EYES SHINING IN THE RAIN. Normally it is trouble but PAUL insisted on asking WHAT’S THE MATTER WITH THE MILL and MICK demanded TELL ME WHY as up stepped JOAN to take us on A JOURNEY THROUGH TIME with her Mum’s memories of Trafford Park. Quickly back on his now two feet GEOFF was that ROCKET MAN, zero gravity helping, and JO was just hearing the SOUND OF SILENCE, in the same vacuum no doubt, but KEVIN insisted we should ROW ON. It was, however, time for CARL to hit that DIRTY OLD TOWN with SUE flaunting her ROSE TATTOO and RICHARD wishing he was FAR FROM THE MADDING CROWD.

With the theme from Barry Norman’s Film Programme GRASSROOTS told us I WISH I KNEW HOW IT WOULD FEEL TO BE FREE followed by another of DAVE SARGENT’S unnamed songs that we christened THE GARDEN SONG and which reminded PETE of the BLUE MOON we last saw in July this year. ROB, on the other hand, sang COME WRITE ME DOWN which is about as close to marriage as he will probably get and which ANN told him was about as obverse as him DEFYING GRAVITY and as likely said ARTHUR as there being no FENCES to stop him reaching the mountain. Digging deep ROBIN then came up with that old favourite THE GRANDFATHER CLOCK but MICK went to his recent past with his GEORDIE GIRL while PAUL gave a word of advice with DON’T GET TROUBLE ON YOUR MIND complete with violin solo by Arthur. After a sublime evening RICHARD insisted he had a LONG WAY TO GO so SUE & GEOFF called out the SLOOP JOHN B and ARTHUR sent us all home singing the blues with BOBBY McGEE which fair raised the roof. Magic!

Not huge turnout but enough good performers outnumbered by the audience provided a great
atmosphere and plenty of good craic encouraged by Hosts ED & SUE. The evening was started well by BANJO JOHN with Miss Lee Morse’s DANCE AROUND YOUR BONES swiftly followed by ROBIN with LYING EYES and ED who sang that eminently nickable ALONG THE VERDIGRIS by Tom Paxton. PAUL then took the floor, and a sly glance at our hostess, for BLACK EYED SUSIE which somehow persuaded JO that THE CARNIVAL IS OVER but certainly not for MARK who played a guitar instrumental ALBATROSS. Equally quietly JOHN CHILCOTT sang a lovely song LOOKING AT THE RAIN before ROB on his return from his trip round the south of Ireland exaggerated with SOUTH AUSTRALIA which enabled us all to sing along with gusto before ANN settled us all down with one of her favourites THE TROUT. Quite why but this prompted PHIL to play and sang DOWN WHERE THE DRUNKARDS ROLL by Richard Thompson and again we all joined in the chorus before JAN treated us to one of her favourites WESTLING WINDS with words by Robbie Burns which left RICHARD GRAY to wind up the first round with his own Country Music Song EVERYBODY WANTS TO GO TO HEAVEN. You would think it would be full by now. Still with his mojo working BANJO JOHN opened the second round with the 1930’s WALKING MY BABY BACK HOME to which everyone sang along and suitably roused JO came to the front once more and had us sing along loudly with WE SHALL OVERCOME that was actually a tour de force which even JOHN CHILCOTT'S wrist slitter A SECOND CUP OF COFFEE couldn't dampen. Next we had the novelty of PHIL forgetting his hearing aids so deciding to play a Bob Dylan number TANGLED UP IN BLUE as he thought it quite appropriate if he sang it slightly out of tune! The writ will no doubt be in the post. With a lot to catch up on ROB did his best as did the horse with the GOOD SHIP CALABAR and ED was very amusing with RICKETY TICKETY TIN which went down well before ROBIN told the sad story behind THE SNOWS OF NEW YORK by Chris de Burgh. More promisingly RICHARD GRAY sang his own promise COMING HOME TO SEE YOU TONIGHT leaving PAUL to play some 1930’s JUG BAND MUSIC and JAN & MARK fresh back from their odyssey to the far north of Scotland sang JACKSON from the deep south. ANN on the other hand took us down the Rhine for LORELEI a German Folk Song leaving MARK to take us to the interval with the STIXWOULD HARVEST SONG urging us to drink good ale as we went off to the bar.

Robin, Martin and Vic won a raffle prize each and a newcomer whose name escaped us also guaranteed his return by going home with one.

With huge quality still remaining after the break PHIL sang the very lengthy ROADS TO MOSCOW with some feeling they could have walked it in the time and certainly had ROBIN thinking of the LEAVING OF LIVERPOOL but ED soon put everyone right with THE BANTAM COCK before PAUL gave us all the GOOD MORNING BLUES and still ANN was seeking THE FOLK SINGER. Still in that frame of mind RICHARD gave us an old Beatles number The LONG AND WINDING ROAD leaving JAN to sooth us with the beautiful LAGAN LOVE and hopefully he meant us all after his 6 week sailing trip when ROB sang IT'S GOOD TO SEE YOU. We don’t know what they did to Carl on that trip but he has not been seen since! Hope he is alright! Finally and with great gusto MARK & JAN recruited us all to their gang with THE BLUE COCKADE to end a cracking night.

A small but perfectly formed audience welcomed hosts KATH & STAN to open with BLACK WATERS and BANJO JOHN soon had us rocking with the FOLSOM PRISON BLUES before PHIL went for a STUDY IN by A M Carcassi. JANET’S reply to this was that THOSE WERE THE DAYS as ROBIN hit the STREETS OF BALTIMORE but all ED could see was MATCHSTICK MEN. Next JOHN CHILCOTT celebrated THE PONY MAN as ANN looked to the heaves for ALL MY TRIALS LORD but KATH & STAN were 10 THOUSAND MILES away. Sadly BANJO JOHN was still downbeat with SHOW ME THE PRISON and ROBIN was on his way out of DURHAM TOWN. Coming up with a novel idea PHIL asked us WHY DON’T YOU LOOK INTO JESUS to which ED replied IT’S GOING TO BE ONE OF THOSE DAYS and JANET was equally pessimistic with DIAMONDS AND RUST. More cheerfully JOHN CHILCOTT took us to the Southern States to meet COTTON JENNY as ANN exclaimed O SUSANNAH and KATH & STAN took the TRAIN ON THE ISLAND. Coming up to the interval ROBIN brought in his old favourite JOCK O’ HAZELDENE and BANJO JOHN very kindly invited us to HAVE A DRINK ON ME.

The raffle saw Carole win the wine, Janet win the tea, Kate take home the Smellies and Janet coming back to win the preserves cherries before PHIL opened with FOTHERINGAY. Going back to school days JANET had us singing GREEN GROW THE RUSHES O leaving ED to introduce us to CAROL AND KELLY but ANN was off to the WIDDECOMBE FAIR which for KATH & STAN was NINE HUNDRED MILES too far. So PHIL suggested we should take to the BARGES but ED was out roaming the WIDOW’S MOOR as JANET was all philosophical with WINGS. More cheerfully ANN tried to remind us it was SUMMERTIME as KATH & STAN went back decades for a revealing CENSUS but PHIL just went back as far as WEDNESDAY MORNING 3 AM. A greatest hit from JANET in the form of ODE TO BILLY JO started the build up to cracking climax as first ANN took us out to THE WILD SIDE OF LIFE and KATH & STAN went NIGHT VISITING  before ED told us that ALL THE GOOD TIMES WERE PAST AND GONE!! Don’t believe it!

Every Tuesday night we are certain of a great time with a bit of drama because we never know who will walk through the door to provide the very best entertainment for our army of supporters. Singing a song Baz couldn't remember DON & HEATHER got the ball rolling with Paxton's RAMBLING BOY swiftly followed by a big welcome back for PETE ROBERTS who told us YOU AIN'T GOING NOWHERE and MIKE COSGRAVE who related the story of THE LAZY FARMER. Next BANJO JOHN wasn't to be outdone in the queue for ICE CREAM to which JO replied on the NEXT TIME ROUND and DAVE BOULTON vowed IF I HAD MY TIME OVER AGAIN, one of his own of course. One of the stars last week DAVID returned to play and sing the very difficult REQUIEM by Gary Barlow following a sad loss, wow. CHRIS replied with an equally demanding M4 FREEDOM TALKING BLUES and ANN with an equally difficult to spell VAIR ME ORO VAN O before PHIL told us about being in a submarine with LIFE IN DARK WATER. Then we were off to OWENSBORO with FAIR PLAY as RICHARD GRAY told us he had both a SETTING AND A RISING SUN but KAMRAN revisited Robert Johnson's TRAVELLING RIVERSIDE BLUES. Back again and lucky for us JANET got up next with YOU ARE THERE before ED went all sentimental with ABSENT FRIENDS which set BANJO JOHN off RUNNING WILD while JO went FROM BOULDER TO BIRMINGHAM. Keeping up the momentum MIKE then treated us to the LAKES OF PONCHARTRAIN before PETE took us to the interval with WHOLE LIFE THROUGH.

From the raffle Ann went home with the bottled cherries, Joan took the wine, Alan had a CD and one of our newcomers took the tin of biscuits before DON & HEATHER had us all singing with FIRE AND RAIN. Then RICHARD told us what happens ON MY WAY HOME and DAVID returned to tell us about DREAMS before was more basic with BILLY CONNOLLY'S WELLY BOOT SONG. Coming back JANET introduced us to BILLY BOY and CHRIS told us of THE HANDS OF JOSEPH before ANN asked LET ME BE YOUR LADY FOR TODAY. Teaming up for the first time DAVE and MIKE gave us a brilliant rendition of ARTHUR McBRIDE as FAIR PLAY were off with THE WAYFARING STRANGER and KAMRAN seriously AIN'T WE CRAZY to which ED replied SHURRUP YA BLOODY LIAR. To finish us off PETE came up with a BOOZING BLUES which DAVE said was all part of THE MUSIC AND THE CRAIC before PHIL replied with CATHY'S SONG and MIKE had us singing into the street with THE BALLAD OF ANNIE MOORE the first person from Ireland to pass through the Ellis Island immigration centre. 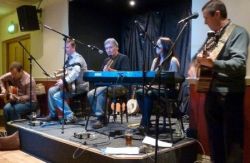