The last Acoustic Folk Night of 2013 turned out to be a great evening with a quite different mix of performers and audience kicked off by DON & HEATHER with a band up version of A LESSON TOO LATE FOR THE LEARNING with Paul, Claire and few others. STEVE then stepped in with his view of a relationship IN A BUBBLE while JO was IN THE BLEAK MIDWINTER. Unusually cheerful GED told us he was BUILT FOR COMFORT while JIM & LYNN were off tasting a little bit of THE MOUNTAIN DEW and ARTHUR responded by talking to his friendly badger POLONIUS. Raising up a chorus PAUL said GO TELL IT ON THE MOUNTAIN as PETE decided to treat us to one of his own about the ALEXANDER LIGHT as did MARK with his FESTIVE BLUES. Next JAN had is laughing with the IVY AND HOLLY while CARL settled for the ever popular SCARBOROUGH FAIR and BRIAN led the next chorus with YOU RAISE ME UP. In need of a tune or two CLAIRE with Paul played THE HOYS OF WEXFORD & SHOE THE DONKEY and for some reason DAVID thought of his own LIGHT HEARTED MAIDENS which might have made DAVID decide to play and sing I SAW THREE SHIPS. Following this IAN played his own composition A RAG FOR TUESDAY NIGHT leaving BOB to be LONG, LONG GONE and ARTHUR to be propping up MURPHY'S BAR. Still celebrating Christmas JO then led us all in SILENT NIGHT followed by CARL with THE BRIGADIER and GED with the MULESKINNER BLUES and RICHARD GRAY with his own THE BEST IS YET TO COME as we reached the interval and raffle.

Starting the second shift with another band up DON & HEATHER with PAUL & CLAIRE had everyone out in the Aussie sun with the DIAMANTINA DROVER t which STEVE replied with another one of his own SAVE THE WORLD as JIM & LYNN dashed off on THE IRISH ROVER. Next JAN & MARK wished us all the best with SO HERE'S TO YOU as PETE doubled back with AIN'T GOT NO HOME and BOB went north for the WILD MOUNTAIN THYME. Unexpectedly DAVID then had us all in pleats as he dedicated IF I SAID YOU HAD A BEAUTIFUL BODY WOULD YOU HOLD IT AGAINST ME to Kate, in tribute to their relationship at the door, to which IAN responded with another of his compositions RAG IN A MINOR KEY and PAUL also responded emotionally with his own song about SAILING DOWN THE MERSEY and crossing over to Ireland to see his family. CLAIRE then played IT CAME UPON A MIDNIGHT CLEAR & WE THREE KINGS to which RICHARD replied with his own WE STILL HAVE A LONG WAYTO GO and in a lighter vein MARK & JAN in parody sang A REST TO THEM MERRY GENTLEMEN. In deadly earnest ARTHUR then sang his own only slightly cynical RUDOLPH'S BLUES to which GED exclaimed LORD SEND ME and IAN replied he must be HERE, THERE AND EVERYWHERE. Back in folk mode DAVID then sang and played GEORGIA ON MY MIND as DON, HEATHER banded up with PAUL & CLAIRE or I WASHED MY HANDS IN MUDDY WATER to send everyone into the street singing with seasonal greetings and best wishes for 2014.

A storming full house of over 70 brought massive talent and a great audience to share the Christmas Party "lock in" with a buffet and mulled wine followed by Janice's birthday cake and mince pies as JANICE & MICK started the evening with YOU DON'T HAVE TO SAY YOU LOVE ME but of course we did. Ten combining as WATTLE & DAUB guitarists IAN & DAVID played PAVANE before BANJO JOHN explained the meaning of BLACK AND BLUE and BRIAN sang the first CHRISTMAS SONG. Taking his lead FREE SPIRITS had us all singing to the RED ROSE (NOSE) CAFE but GED still had those DEEP ELLUM BLUES and BETH was telling us I WON'T BE HOME FOR CHRISTMAS. Back on track JO led us with AMAZING GRACE while FAIR PLAY sang RESIDUE and DOREEN recited her poem IT'S NEARLY CHRISTMAS. Joining in the spirit of things JOHN CONDY admitted I BELIEVE IN FATHER CHRISTMAS while CHARLES, LIZ & ROSE were off to EL GATO MONTES and in the same vein CLAIRE played ANDANTE. Deciding to leave London PETE was on the BEG, STEAL OR BORROW but ROB was off to the RAWTENSTALL ANNUAL FAIR while MIKE COSGRAVE was off across "The Pond" for A FAIRYTALE OF NEW YORK. This left ARTHUR a bit PARANOID to which JIM & LYNN replied they were happy with A MON LIKE THEE and CARL said it must be the MAGICAL SKY before DAVE recited LEATHER.

The interval raffle saw the proceeds go to the charity Chicks which offers children a break from their difficult home lives! See www.chicks.org.uk

After the great celebration buffet etc in the interval KAMRAN urged us to GO GENTLY but ROBIN said, "Yes, but SOMETIMES WHEN WE TOUCH." Next we were delighted to welcome back PETER KING with his own brilliant song WISHING WELL but JUDE went all Latin with GAUDETE to which PAUL replied I'm following the DRINKING GOURD. Another old friend RICHARD GRAY then sang EVERGREEN and JANICE & MICK paid tribute to Nelson Mandela with I WISH I KNEW HOW IT FELT TO BE FREE before BETH was a bit naughty in GRANDMA'S FEATHER BED. A bit more naughty came JIM & LYNN and PADDY McGINTY'S GOAT as it did with ARTHUR and his brush with the RSPCA before DOREEN recited her WINTER CAROL. Preparing for a trip FAIR PLAY told us about BIRDS AND SHIPS while the song in CARL's head was I SAW A STRANGER WITH YOUR HAIR as FREE SPIRITS warned that ALL THE GOOD TIMES could be past and gone. That old romantic BRIAN then teamed up with JANICE for MY FOOLISH HEART just as PETE was KNOCKIN' ON HEAVEN'S DOOR and KAMRAN invited us to join him on the MIDNIGHT SPECIAL. Poet DAVE then had an interesting choice with Robbie Burns' TO A LOUSE just as PETER KING returned with another of his hits BACK IN YOUR WORLD and JOHN was equally serious down in THE CAVES OF JERICHO. Going for a big finish as midnight approached MIKE too us back to his ROOTS as GED told us the MOON GOING DOWN and ROB said we had better be ROLLING HOME. So we did after a mega night with 34 performers.

A very different but sublime evening of new songs, new performers and new band combinations was well organised by KATH & STAN to a massive 42 performances by an extremely talented bunch of people and it was enjoyed by a very receptive audience. DON & HEATHER kicked off with THE DIMMING OF THE DAY (Thompson) followed by CHRIS with RUDIGER (Knoppler) and KATH & STAN who were no WAYFARING STRANGERS. On early for a change GED took off for the THE LAST MINSTREL SHOW before CLAIRE played an O'CAROLAN AIR and JO told of the FAIR AND TENDER LADIES. Combining PAUL with CLAIRE told the story of GEORDIE before BRIAN explained how LITTLE THINGS MEAN A LOT as it did when ANN rose for the very first time to cross over from audience to performer and tell us the true story of WIDDICOMBE FAIR. Then it was confession time as ED told us he liked TRASHY WOMEN which had SIMON saying he was LEAVING ON A JET PLANE and BOB relating the demise of COCK ROBIN. On a higher plane CHRIS sang of THE MERMAID AND THE SEAGULL (McTell) before DON & HEATHER had us all singing to the RARE AULD TIMES and PAUL taught us a new chorus in SWEET CAROLINA. Sadly BRIAN claimed he was ON MY OWN as GED extolled the virtues of those BUILT FOR COMFORT and KATH & STAN set forth on the GOODNIGHT LOVING TRAIL. Quickly on her feet CLAIRE then jumped up with 2 REELS as ED set out on the story of RED HEADED ANN. Coming to the interval SIMON stepped up with HONEY BUNNY ICE CREAM as BOB disentangled himself from AMONG THE LEAVES SO GREEN-O and KATH & STAN shot off after the BANJO PICKIN' GIRL.

The big raffle saw Pete win the Wine, Kath the Chocolates, Chris a Chocolate Orange Room and the room perfume go home with Barbara and it preluded another new band formation with PAUL, CLAIRE, GRAHAM & DON tentatively assembling as FREE SPIRITS to sing STREETS OF LONDON to which BRIAN replied YOU'LL NEVER WALK ALONE as SIMON was calling for JOE THE WAITER (Gary Newman). Having broken her duck ANN returned with THE WEE WEE SONG and MISS NAN KNOCK ABOUT which prompted BOB to unleash FRANKIE AND JOHNNY and CHRIS to wheel out THE BALLAD OF CURSED ANN just as GED was off to ST LOUIS. Then another new band MORE FREE SPIRITS, with ED, PAUL, CLAIRE, HEATHER & DON, raised the roof with ALL THE GOOD TIMES ARE PASSED AND GONE leaving ED with JOHNNY DEAREST JOHNNY and BRIAN to suggest we should BRING HIM HOME. A QUICK STORY from PETE set up KATH & STAN for a trip to the SLEEPY DESERT and CHRIS to play an instrumental THE WINO AND THE MOUSE followed by a song EIGHT FRAMES A SECOND (Mctell). Next CLAIRE was THE IRISH WASHERWOMAN and from the same vicinity BOB led us in COCKLES AND MUSSELS before ED told us about THE WIDOW ON THE MOOR which led GED to call JESUS ON THE MAINLINE. It also gave PAUL the BROWN FERRYBLUES and CHRIS a dose of SUMMER LIGHTENING but the grand finale was provided by another new band, THE JUBILADOS, comprising PAUL, CLAIRE, HEATHER & DON left everyone reluctant to leave with a rousing version of I WASHED MY HANDS IN MUDDY WATER before finally imploring everyone to STEAL AWAY. 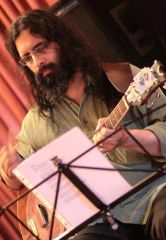