After last week's standing room only another fifty odd people filled the room for a craicing evening led superbly by Mark & Jan Taylor who asked Ged to open the proceedings with Working On The Railroad accompanied by John Condy playing one of his Harmonicas. Robin then sang Chris De Burgh's Restless Heart followed by Karen & Shelley in great voice with The Sparrow, Jonathan with Blues From The Game and Mark & Jan who were out on the 30-foot Trailer. Colin Rudd then asked If Tonight and Banjo John mourned Delia's Gone which prompted Richard Sails to go to The Bellringing. Pepper Street were anticipating the New Year early with Don't Let Me Into This Year With An Empty Heart while Rob was singing in praise of the Alabama and Heather McNeill went all melancholy with Jar Of Hearts by Christina Perri. Paul then gave us that great Morris tune Rule Britannia Princess Royal while Carl went to Thackray's Aloysius before the welcome return of Claire with her magic flute for Sweetness Of Mary with John Condy and finally Richard Gray reckoned you are alright With God On Your Side to end the first round. Jonathan opened the second innings with John Prine's Donald And Lydia followed by a rampant City Of New Orleans from Pepper Street and Sweet Lemeney from Richard Sails.

You Made Me Love You was a golden oldie to open the second half from Brian which left David reaching for the Dead Dog Scrumpy and Carl telling us Cursed Be The Caller With His Knock, Knock, Knock. Oh Sit Down was Mikey's response but the Bailey Sisters easily negotiated that one with Karen's Navigator and despite being with friends Robin sang I Still Miss Someone. Isobel, straight from choir practice and we are glad she made it, was next on her feet for the sublime O'Carolan's Hewlett with Ged asking her to Bring It With You and Paul close behind with one he composed in One Day. Heather McNeill then told us about the Perfect Indian, Martin Said To His Man replied Rob but Mr Bojangles danced his way up the street thanks to Colin Rudd. Richard Gray still wanted to Change The World before Mikey treated us to Sweet Caroline, Isobel again played beautifully a slow tune, Elizabeth Clare, and Pepper Street razzed it all up to a climax with A Good Noise.

Another busy evening saw Carl make the journey From Claire To Here and perhaps in protestation at the English weather, Banjo John sang I Get The Blues When It Rains, aided and abetted by John Condy, to which Stella could only reply Hallelujah. Next up were Ruth, Kath & Stan with both Dear Mary and a trip to Horncastle Fair followed by Rob leading us all in Shenandoah and Jan with her Roving Ploughboy. Arthur then added his feelings with the End Of Summer but it was all Fire And Rain to Brian while Kamran pleaded Bring Me Sunshine. The Fridge Poets, ex-Idle Young, were more optimistic with The Nightingales and Kiss Me And Weep while Mark called out the army with The Roust Of The Blues. Jon was more surreal with The Bottomless Lake while Jean, making a welcome return, sang Sonny's Dream and Brian, with all those barred chords, was off down The Long And Winding Road. The tale of Duncan & Brady came next from Ged while Paul gave us The Rangers’ Command and Eric was still Addicted To Anusol. Mike then covered a Bailey Sisters special with Rue followed by Pepper Street who had Got Boats To Build before warning everyone to Keep Your Distance. Keep The Change Bob posed the question Where Are You Tonight but Banjo John was out on the town with his Shake, Rattle and Rolling with John Condy again before Rob & Mario, two new performers, gave us their version of Whisky In The Jar and Ruth, Kath & Stan gave us their Last Goodbye.

After the interval Arthur was Certain As Rain as Paul had the Walking Blues and Mark & Jan swore We'll Hunt Him Down. Richard was then the only remaining Fridge Poet with his Organised Labours, the rest of the band had gone home, and Colin must have had a premonition of the 6-1 battering they gave Man United with his tribute to Man City, 80 Years Of Football At Maine Road, followed by Ged whose The Moon Goes Down probably summed up the rest of the Reds season. Eric then came up with another a his own creations, Everything I Do, I Do It For Me, while Jean came next with Sweetheart before Brian did a good job on Sonny, Mike tried to control those Wild Horses and Kamran ended the evening on a high note with Singing The Blues with whistling audience participation!

Mick & John aka Pepper Street were in great form last night starting us off on a Pleasure Trip which prompted Don & Heather to reminisce about the Spanish Lady, especially for Kate, Kamran, however, was just an old Lazy Bones but Banjo John was off to the South Pacific chasing a lady because She Wore Red Feathers And A Hula Hula Skirt. No wonder Brian claimed I Only Have Eyes For You but Rob was having none of it when he returned to real life with and bemoaned just one more day on The Grey Funnel Line. Ged also stayed real by giving us a warning about Careless Love and Colin started of his mini tribute to Bob Dylan with I Want You as did Robin when he declared It's Good To Be Back Home Again. Judy Small's Mothers, Daughters, Wives was Carl's first offering to complete the circle to bring back Pepper Street with Mick's John H Dillinger Jnr, Shooting Bankers, and introduce newcomer Paul for a quartet of tunes from his harmonica starting with Rout Of The Blues. Banjo John was next up with the Belle, Belle, My Liberty Belle before Carl had us all singing along with Jez Lowe's Old Bones but Robin was off to visit the Bonnie Lass Of Fyvie-O. This left Ged pleading Lord, Send Me An Angel and Rob claiming the most tenuous of links to Who Killed Cock Robin, complete with all the sign language, while Colin continued his Dylan theme by showing us how even very popular songs need not become hackneyed with his version of Blowing In The Wind. Don & Heather then gave everyone a chance to clear their throats with John Prine's Speed Of The Sound Of Loneliness leaving the floor to Stanley Accrington for his Wayne Rooney-O and Brass Band to take us up to the break.

The usual battle for the raffle prizes this week was highlighted by Sue winning a picture of a French scene painted and donated by Alan who we only recently discovered is a very talented artist. Ask to see his sketch book and place your orders now!

In the second half Pepper Street kept up the flow with Something Like The Blues allowing Rory to get his Hurdy Gurdy finely tuned for Bufar's Waltz and Kamran to slip in for Stagolee. Brian then turned to a Norman Wisdom classic Don't Laugh At Me and newcomer Paul next turned to the guitar for his own composition There's Time which led Ged to comment Easy's Getting Harder Every Day. Robin then turned to an old favourite in Belfast Mill (Weave And Spin), and since he had just passed by Cammell Laird's Rob was inspired to sing The Alabama but Carl didn't need such a tangible link to sing Wishing Well and have us all hoping for time in a peaceful world. How much of it is fantasy was demonstrated in Colin's last Dylan song With God On Our Side, clearly showing that when people fight they like to think they are in the right, but Brian stilled reckoned Everybody Loves Somebody Sometime and Kamran mused Who Knows Where The Time Goes. By this time Rory was a roarin' and the combined tunes from Lancashire and France got a great response leaving Don & Heather to prepare for us for home time with Leaving On A Jet Plane and Stanley Accrington to finish us off with his brilliantly poignant In This Town and The History Of England in a nutshell. Magic!

Another craicing and crammed evening with Ed & Sue well and truly at the helm and starting the proceedings with a lively Whip Jamboree as a sign of things to come. Banjo John then enlisted John Condy for Black & Blue by Fats Waller amongst others and, joined by Mick as Pepper Street, John stayed up to tell us he had Boats To Build. Robin next extolled the virtues of Blackmore Knight and sang their Sister Gypsy followed by Rob with Rawtenstall Annual Fair and Brian with You Raise Me Up. Kamran confessed he hadn't drilled any more fingers and then still blew us all away with his Dead Shrimp Blues, on yet another guitar, while Mark commemorated the recent demise of four Welsh Miners with The Last Pit In The Rhonda and Jan was equally local with Dougie McClean's Fiery Cross. We obviously were not going to escape a beating as Richard Knott gave us his own composition Black And Blue, a guitar solo, before Brian and Stella Challenor, fresh their guitar lessons, gave us Leaving On A Jet Plane and The Rose respectively. Arthur Marshall then examined the difficulties of keeping his Grandfather's Ferret while Paul Riley introduced us to an Oxford Folk Club favourite, Drill Ye Tarriers Drill, and Ged sang Needle Of Death in tribute to Bert Jansch who has just recently entered a hospice. Ann C urged us all To Yodel It Over Again, there must be a hidden meaning, and for Carl The Band Played Waltzing Mathilda and Don & Heather claimed they Wouldn't Have It Any Other Way with their own composition. Then Colin insisted we Don't Take It Down The Road, as if we would, and with Hard Times and Mirabeau Bridge Turnpike took us up to the break.

The raffle saw Eric win the Cuddly Toy for Sarah, Michael took the wine, Helen had the CD, Derek & Heather took the box of Biscuits, Colin won the Quality Street kindly passing them round and Mick took the Lancashire Sauce donated by Anne & Michael who always bring us something back from wherever they have been visiting.

Kamran fired us up for the second half with O! Glory How Happy I Am before Keep The Change Bob, with banjo and mandolin from Turnpike, sang Woody Guthrie's Goin' Down The Road followed by Isobel who livened us up with two polkas Egan's and Ballydesmond. Eric then explained Dr Steve Jones' The Healing Power Of Lust but Ged couldn't wait to Step It Up And Go in the company of Richard Knott, who provided the exciting and intricate guitar breaks and tried to control his erratic timing (Ged's words), and Robin was off on The Road To Dundee while Ann C was still mixing those Mill Workers leaving Don & Heather to try to Steal Away with a strong chorus of like minded people. Paul Riley then sang about John Riley, no relation, while Rob was thinking of the coming Canal Boat Trip with The Good Ship Calabar and Brian had Ruby Murray in mind with her version of Mr Wonderful. Carl next had us all singing Black Diamonds by Jez Lowe as did Mark & Jan with Red Rooster before Colin made us all think with I'll Be With You At The End. This left Pepper Street Killing The Blues and Turnpike to wrap things up with their own Hold Me Now and An Old Fishing Song followed by Lancashire Lads concluding an excellent night. 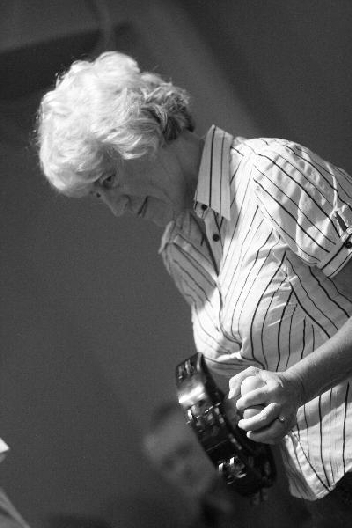