Every December, three of the finest folk performers go around the Country with their magical Christmas tree! The tree is full of songs and tunes from everywhere and the audience pick an envelope off the tree and effectively make a blind choice which then is added to the list of songs for the night! It is a fun and spontaneous night for everyone - especially Maggie, Chris and Pete -who quite literally don’t know what they are going to do next…but they did it brilliantly!!!

The Funniest man in Folk!

From starting in folk clubs, and then writing & performing at the Octagon theatre in Bolton, his career has alway combined singing and acting. From TV programmes and films such as Coronation Street, Emmerdale, Phoenix Nights, Dinner Ladies, Alan Bennett films, Brassed Off, My Son The Fanatic & Coogan's Run, to the many radio plays and programmes he's presented or guested upon, there has throughout been a steady stream of LPs and CDs - fifteen to date, the early ones all now remastered to CD.

A pretty full house were treated to the highest quality of musicianship by both men enlaced with Denny's wonderfully emotional singing and presented with Chris' natural and unflagging humour. The evening was made up of stirring songs like Red Headed Ann and Starry Night interwoven with airs, jigs and reels and brought to a rousing finish with old favourite Roseville Fair. Fortunately a slightly less exciting encore was ordered by Chris so that we didn't all drive home in the frenzy they had taken us to purely in the interests of maintaining the volume of their audiences by not having them kill themselves on the way home! A mega night!!!

The first "BBC 2 Folk Singer of the Year"

Powerful, hugely moving, warm, humane, inspired, funny and gut wrenchingly honest. These are just some of the superlatives used to describe Vin's performance this year. This international, award winning, singer songwriter is completing his 40th year on the road. He is for ever in demand and his shows are continually sell outs, so get your tickets early!

Honorary Degree of Master of Arts awarded to Vin by Teesside University in 2001 for his music and his services to the arts and culture of the area of the North East of England.

Vin was in barnstorming form keeping the audience enraptured till almost midnight with his customary string of stories and humorous observations from real life. Songs like Man Of The Earth, Punjabi Girl, Wings, Howard Green, Silver And Gold and Down by the Dockyard Wall had a full house ringing the rafters and demanding to know when he will return and round about November 2011 was the swift reply. Can't wait! 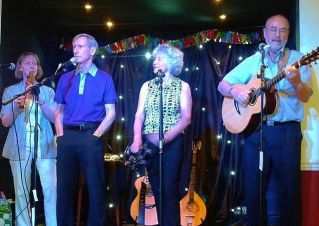