A lively evening with PAUL McD kicking off with I RECALL A GYPSY WOMAN swiftly followed by KATH & STAN with DINK’S SONG and PETE ROBERTS and HEART OF GOLD. Then never too soon for JIM & LYN who stepped up with the STAR OF THE COUNTY DOWN and PETER BRIDGE with HONEY BABE BLUES and CHRIS wishing us THE THINGS YOU WISH YOURSELF. Next HEATHER put a strong case for the role of THE OSTRICH at Christmas (poem) before with wider issues in mind DON & HEATHER touched on the migrant problems with ACROSS THE BORDERLINE. It was good to have EDDIE with us again as he sang the unusual BOAR’S HEAD CAROL before HILARY had us laughing at her CHRISTMAS CRACKER JOKES (e.g. what did the dog get for Christmas? A mobile bone!) followed by ED with the off the wall Kid’s view of Christmas presents etc in SCARLET RAY GUNS. Then PAUL McD thought it was time for a little PERSUASION as PETE ROBERTS came up with HARVEST MOON and KATH & STAN set out on the GOODNIGHT LOVING TRAIL so no wonder PETER BRIDGE saw the funny side of THE FOLK CLUB by Richard Stillgoe. With the break in sight JIM & LYN introduced THE BELLE OF BELFAST CITY and CHRIS asked WOULD I LIE TO YOU before DON & HEATHER took us off to the ROSEVILLE FAIR.

The Interval Raffle saw Stan win the wine, Vic win the Box of Quality Street, Pete win the Feet Warmers, Ken win the Luxury Candle and Heather K win The 50 Sheds of Grey before EDDIE started the second half with SILENT WORSHIP, Handel put to words. Soon off to France PETE ROBERTS lustily sang I SHALL BE RELEASED followed by HILARY with MORE CHRISTMAS JOKES like who hides in the pantry at Christmas Mince Spies and ED gave us the slightly risqué MURGATROYD by Les Barker. Next it was nice to be reminded by PAUL McD that YOU ARE NOT ALONE just as PETER BRIDGE also reminded us with STREETS OF LONDON that some people are alone. On a lighter note CHRIS played Bert Jansch’s ANGIE followed by KATH & STAN leading the singing of BRIGHT MORNING STAR, DON & HEATHER with MAY YOU NEVER, EDDIE with THAT’LL BE THE DAY and JIM & LYN with THE GYPSY ROVER. Heading toward a big finish ED had us chanting MI HUSBAND’S GOT NO PORRIDGE IN HIM before latecomer RICHARD GRAY had us singing THE VIRGIN MARY HAD A BABY BOY followed by PAUL RILEY with Arthur Marshall’s FENCES, PAUL McD with SILENT NIGHT & WHITE CHRISTMAS and finally PAUL RILEY and RUDOLF THE RED NOSED REINDEER. Merry Christmas everyone!!

A bumper crowd braved the weather to make the Christmas Party a great success with HEATHER & DON welcoming all the NO HOPERS, JOKERS & ROGUES to entertain and be entertained. KATH & STAN turned up with the NEW YORK GIRLS and CHRIS brought MRS ADAMS ANGELS (R McTell) before EDDIE unsheathed his melodeon with JOY TO THE WORLD, DING DONG MERRILY AND JINGLE BELLS. Following this lead PETE sang ST PAUL’S SONG, PAUL sang MARY’S BOY CHILD, JIM & LYN told us the FAIRY TALE OF NEW YORK and STEVE had us crooning with WHITE CHRISTMAS. Next JAMES returned to his favourites for NOWHERE MAN and SIMON crossed the Atlantic for some FOLSOM PRISON BLUES before we returned to theme with HEATHER from the TURKEYS point of view, ED from out of this world when A SPACEMAN CAME TRAVELLING and CATHY & PETER who went all traditional with THE HOLLY AND THE IVY. Back in the real world HILARY then gave us some MARITAL ONE-LINERS and MIKE got rid of the PIDGEON IN THE CHIMNEY leaving ANDY to give his experience as a serial raffle prize winner in RAFFLE PRIZE LAMENT. As we raced towards the Chips and Sarnies Buffet we found IAN with his CHESTNUTS ROASTING ON AN OPEN FIRE and EDDIE following THE SNOWMAN and KATH & STAN in the BAY OF BISCAY-O.
The interval Raffle saw £100.00 go to the North West Air Ambulance Charity based in Altrincham when Jim won the Bottle of Red Wine, Heather Kenyon win the Christmas Pudding, serial winner Andy win the Box of Biscuits and every performer win a CD of their choice. PAUL opened the second half with his CHRISTMAS CAROL 1st Verse Only MEDLEY followed by PETE with SISTER SONG and STEVE with O CHRISTMAS TREE, JINGLE BELLS & SILENT NIGHT. Next ANDY reminded us that many will be A DOLLAR SHORT OF CHRISTMAS before IAN & CHRIS formed a new duo for an AUTUMN LEAVES instrumental duet which left MARTIN muttering I WANT A CD for performing in SALE before PETER & CATHY went off A-WASSAILING. Getting back to normal JAMES had us rocking to KANSAS CITY as SIMON celebrated AMELIA EARHART and MIKE remembered the WRECK OF THE EDMUND FITZGERALD. With a brief nod to Christmas EDDIE told us SANTA CLAUS IS COMING TONIGHT before DON & HEATHER headed down south with WAGON WHEEL and KATH & STAN boarded the TRAIN ON THE ISLAND. Briefly on a sombre note PAUL touched on the subject of depression in life and in the song PEOPLE PUTTING PEOPLE DOWN by John Prine before JIM & LYN had us singing with RUDOLPH THE RED NOSED REINDEER and DON & HEATHER had us carry on into the street with ALL THE TUNES IN THE WORLD. A brilliant start to the festive season. Next week mince pies.

There was a big welcome for GRASSROOTS with Janice well again and in harness with Mick to kick off THE FINAL TRAWL which PETE followed with BIG GIRL NOW and then JIM & LYN with I GOT STRIPES. Posing a question ANDY asked DID SHE MENTION MY NAME and HEATHER mentioned many areas of the city in A MANCHESTER CHRISTMAS before DON & HEATHER confessed needing us at the DIMMING OF THE DAY. In good form IAN celebrated THE WAY WE WERE and then DAVID celebrated LONDONDERRY before CARL reminded us that some are NEARER TO NETTLES. On the other hand SIMON told us some have PALACES OF GOLD while TONY told us that with love we all could feel WONDERFUL TONIGHT whereas MICK on RAGLAN ROAD wondered if love was enough. Next PETE said GOODBYE TO THE OLD while JIM & LYN were hot in the RING OF FIRE before IAN was laid back with GEORGIA ON MY MIND. Coming to the break ANDY was in conflict with GENESIS HALL before DON & HEATHER sang their requested DANCES FOR DOLLARS before SIMON picked up some EASY MONEY.
The interval raffle saw Vic win the Bottle of Red Wine, Andy take the Box of Biscuits and David win a Christmas Pudding before GRASSROOTS opened the second half with FINISTERRE followed by CARL looking for BLACK DIAMONDS and HILARY with a cheeky LITTLE VERSE. Philosophically, TONY wondered what will be WHEN I’M SIXTY FOUR while JIM & LYN were away with THE HIGHWAYMAN and MARTIN gave us his own poem IT’S CHRISTMAS TIME IN CAIRO STREET. Back in dreamland IAN took us to FIELDS OF GOLD as ANDY mused IF YOU COULD READ MY MIND and PETE polished up his RAMBLIN’ SHOES before DON & HEATHER remembered WHEN I WAS A COWBOY. Coming to a climax CARL had us smiling at SISTER JOSEPHINE, TONY was thinking of ELEANOR RIGBY and SIMON speculated on the BIG DARK SEA before GRASSROOTS sent us home with THE WAY THAT I FEEL. A quality night. 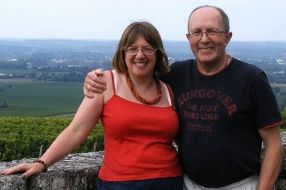