With the promise of a lot of hot performers KATH & STAN insisted we KEEP ON THE SUNNY SIDE while ALLEN reckoned it was always right TO TRY FOR THE SUN but it was BANJO JOHN who played it cool by LEANING ON A LAMP POST. For PAUL McD it certainly couldn’t be A BETTER PLACE (Glen Campbell) as long as you avoid the ARROGANCE, IGNORANCE & GREED of Steve Knightley sang PHIL before PAUL diverted attention to WILD BILL JONES and JAMES came a STEALING. With all this summer weather BANJO JOHN couldn’t help singing DAISY, DAISY before KATH & STAN reminded us of the dark side of life with BLACK WATERS but ALLEN wouldn’t be subdued as he unveiled his love song NEARLY SONNET 18. Optimistically PAUL McD had WHEELS Quite why but PHIL suddenly demanded SHOW ME (John Anderson) so KATH & STAN responded with two tunes JACK ROBINSON & OLD MOLLY OXFORD and BANJO JOHN upped the tempo with ROLL OVER BEETHOVEN as PAUL McD commented HERE COMES THE NIGHT. Coming to the break ALLEN made a break for freedom with his own question WHAT’S IT TO YOU before latecomer MARIAN introduced POLLY PARKER and PAUL re-iterated BRING ME SUNSHINE.

In the interval Raffle there was Wine; an Orchid; a Book; and Room Perfume amongst others with the names of the winners being partially withheld to protect the innocent before PHIL sang about FIRST WORLD PROBLEMS (Mark Dacey) but straight forwardly JAMES said I WILL and MARIAN somewhat agreed with TRUE LOVERS (High Germany) as did PAUL McD with THE BEST OF MY LOVE. Back in the tradition ALLEN returned with THE WORKER’S SONG as PAUL pitied the POOR OLD HORSE leaving KATH & STAN chasing the MAN IN THE MOON. On the other hand PHIL was out on THE DARK AND ROLLING SEA to which JAMES commented he must be HOMEWARD BOUND and MARIAN started to YODEL IT OVER AGAIN. Coming the end of a small but perfectly formed and top quality evening, PAUL packed his bags and was LEAVING ON A JET PLANE and KATH & STAN were away with that BANJO PICKING GIRL before ALLEN added a note of caution about retirement with the GOLD WATCH BLUES. Top drawer!!

Rather appropriately co-host KAMRAN started the ball rolling under the NORTHERN SKY as equally adroit PAUL RILEY followed his namesake in ROVE RILEY ROVE so no wonder KATH and STAN found themselves in the BAY OF BISCAY where it can be a bit rough but IAN calmed us down with TENDERLY. Going a step further PETE had us laughing with some PUN WORDPLAY before BRIAN went all serious with the FACE OF GOD (Hiatt) and ANDY swore we would be FOREVER YOUNG but not if, as co-host SIMON sang, THE VERY THING THAT MAKES YOU RICH MAKES ME POOR. The answer from PAUL was to TEACH YOUR CHILDREN well but MARIAN was off with a risky DARK-EYED SAILOR and for BEN it was equally tricky in THE SWAPPING SONG where more often than not you lose out. So it was a wonder that PAUL RILEY was SITTING ON TOP OF THE WORLD (Mississippi Sheikhs) and STAN and KATH told us WE COULD FLY (Dirk Powell/Rhiannon Giddens) which made smile and then laugh with MORE PUNS from PETE before BRIAN said it was time to sprinkle some STARDUST.

In the interval Raffle Ben won the Bottle of Wine and the Teabags and Shower gel both found new homes but asked to remain anonymous before KAMRAN started the second shift with the AVALON BLUES and latecomer RICHARD did a bit of SHADOW BOXING to which HELEN responded IT SUITS ME WELL as BEN thought it all totally SHAMELESS (Annie Di Franco). With more good songs in the pipeline ANDY sang KING SONG by Jim Croce and SIMON told us the story of DILLARD CHANDLER before IAN & HELEN smoothly combined for SUMMERTIME. This made PAUL just DRIFT AWAY and RICHARD think of PEACE IN OUR TIME, a clever compilation of many Dylan song titles & lyrics). More sombrely STAN & KATH admitted HER BRIGHT SMILE HAUNTS ME STILL as PETE came up with MORE PUNNAGE and BRIAN turned to LATELY by Stevie Wonder. Revving up to a climax BEN invited us into SAMMY’S BAR where IAN claimed my BABY’S COMING HOME (Chet Atkins) and ANDY pleaded OH LORD. WON’T YOU BUY ME A MERCEDES-BENZ? With their reliability record? Sadly, however, PAUL to us NO-ONE CAN MAKE MY SUNSHINE SMILE just as PAUL RILEY started to ROLL THE OLD CHARIOT ALONG and RICHARD shouted LAND AHOY as we reached our destination. Tops!!

A quiet start with about 12 top quality performers in total as GRASSROOTS opened up with LITTLE THINGS before BANJO JOHN asked HOW ABOUT YOU and ALLEN OGG confessed to getting the WILD EYE sometimes. It was then good to see JO back from her travels to sing WHERE HAVE ALL THE FLOWERS GONE with her guitar followed by a first timer young JOSH singing HOLD MY BED by Chuck Ragan. This prompted SIMON & JAMES to tell us the story of AMELIA EARHART’S LAST FLIGHT before JOHN B, another banjo player, sang about THE MUGGLERS and BEN gave us his version of the NEW YORK GIRLS. To crown it all JAMES took a deep breath and gave us a medley of LET IT BE; HEY JUDE and YESTERDAY before GRASSROOTS with ELIZABETH IS SINGING and HILARY with some of her HILARIOUS ONE-LINERS ended the first round. After this people were invited to sing two songs each time starting with BANJO JOHN who regaled us with JAZZ ME BLUES and the ROCK ISLAND LINE before JO brought us to the interval by BLOWING IN THE WIND and then BLOWING IN THE WIND.

The second half was started by AL who with some basic politics rightly scoffed at the POUND A WEEK RISE before telling us that the young should be careful not to misinterpret PICTURES IN A MAGAZINE, his own song. Rising to his feet again young JOSH was immediately on the road RIDING MY THUMB DOWN TO MEXICO and then all the way down to Raleigh with WAGON WHEEL before latecomer RICHARD GRAY pleaded for PEACE IN OUR TIME and then gave us THE STORY OF MY LIFE. Giving way to BEN who sang WILL V AIR (phonetic spelling?) and controversially MY UNFAVOURTITE THINGS to which HILARY tagged on a few of her FUNNY THINGS. Glad to see him back again with his banjo, JOHN B first asked MOSES WRITE IT DOWN and then proceeded to tell us WHEN AN OLD CRICKETER LEAVES THE CREASE which nicely set up JAMES for a big finish with UNKNOWN LEGEND followed by a rampant SPEED OF THE SOUND OF LONELINESS before GRASSROOTS rounded everything off with HARMLESS followed by HERE, THERE and EVERYWHERE.

ED & SUE hosted an evening high on talented performers but fewer in the audience and, on his first return to the club after he injured his shoulder, they invited ROBIN to open with a ride on THE CITY OF NEW ORLEANS. He was followed by PAUL RILEY who was as GOOD AS I’VE BEEN TO YOU before KATH & STAN took the road to the SWEET SUNNY SOUTH and PETES THE KING had us all smiling at his own RUSTY RED PARK BOX. Romantically and instrumentally for IAN it was JUST THE WAY YOU LOOK TONIGHT whereas for PAUL McD it was QUITTING TIME by Mary Chapin Carpenter and for ANDY a case of SUNDAY MORNING COMING DOWN by Johnny Cash. Keeping up the quality ED sang GOODBYE TO THE SEA by David Boulton before our old friend GED DARBY rose to rescue one of his favourite songs, THE LAST MINSTREL SHOW, that Kath & Stan had previously stolen from him. This left CARL to complete the round with one of John Prine’s latest songs HELLO IN THERE which brought ROBIN to his feet with the appropriate HEY, IT’S GOOD TO BE BACK HOME, AGAIN! Fully reciprocated, Robin!! KATH & STAN were next up with THE BALLAD OF DAN MOODY while IAN was at pains to say I AIN’T MISBEHAVING leaving PAUL to pour oil on troubled waters with DON’T LOOK BACK IN ANGER. More upbeat PAUL McD advised us to have THE TIME OF YOUR LIFE by Green Day and satisfied was GED who told us I GOT MINE which was not true of CARL who told us I SAW A STRANGER WITH YOUR HAIR by John Gawker. Coming to the break PETES THE KING sang about DEBORAH as in Deborah Winger whereas ED confessed I GOT STONED (Dr. Hook) and ANDY was LATE TO PARTY by Kacey Musgraves.

In the Raffle Ian won first prize of a bottle of French Red Wine and Andy won the next prize but kindly asked for it to be re-drawn which left Kath Rothwell to win the Make-up Bag with Beauty Products and Paul Riley to win the M&S Herb Plant Pot set and tray. This left GED to suggest all the losers should JUST TAKE ONE LAST LOOK by Todd Waites and PAUL McD to admit that it is SO SAD TO WATCH GOOD LOVE GO BAD by the Everly Brothers and MARIAN kept the mood with the drowning of Willie Lennox in an Irish Ballad, LAKES OF COL FIN. Fortunately the emotional roller coaster hit a happy patch when ROBIN lifted the mood with BOBBY McGEE and IAN played the lovely MOON RIVER before CARL had us the story of the BLACKSMITH AND THE TOFFEEMAKER. Coming to the end of a top night ANDY went with John Prine’s SPEED OF THE SOUND OF LONELINESS but KATH & STAN turned the tables with NO TELLING WHAT A LOVE SONG CAN DO before PAUL suggested everyone should join in with ROLLING IN MY SWEET BABY’S ARMS for definitely a rousing end to a great night. 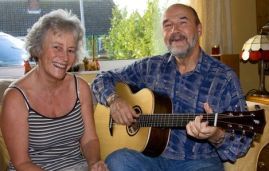