As the place filled up KATH & STAN claimed it was too soon to be out of their bed in MONDAY MORNING and also obtusely PAUL welcomed the weather with HEY RAIN but BRIAN’S TERMS OF MY SURRENDER were something else “’cause sometimes love can be so wrong like a fat man in a thong!” Then there was a huge welcome for the return of SUE & GEOFF with ELI THE BARROW BOY followed by SIMON who paradoxically sang THE VERY THING THAT MAKES YOU RICH MAKES ME POOR before HILARY serenaded us with PARLEZ VOUS SA BOIRE in French about a “No win” situation marriage. No wonder KAMRAN was SITTING ON TOP OF THE WORLD but for JO with guitar THE CARNIVAL IS OVER and sadly for JAMES it was all BUCKETS OF RAIN. Even worse ED told us IT’S A HARD LIFE FOR A HYPOCHONDRIAC as PHIL turned to the GREEN ANTHEM. Then commenting on the threat in Australia to the profession DON & HEATHER sang of the DIAMANTINA DROVER and in tribute to women sailors CARL sang his own ALL AT SEA before for GEOFF it was TWILIGHT TIME. Arriving just in time DOM joined PHIL for the SKYE BOAT SONG as HILARY unveiled JAZZ STUDY No 3 and JO complained of HARD TIMES before KATH & STAN, with DINK’S SONG, took us to the interval.

In the Raffle Ros won the Wine; Brian won the Chocolates: Joyce won the Plant; Jackie won the Torch; Linda won the Purse; Geoff won the Book and Kath won the Mozart CD before BRIAN started the second half with ALL OF ME. Next SUE & GEOFF took us on the WALL OF DEATH as PHIL took off with the BROTHERS IN ARMS before SIMON teamed up with JAMES to tell us SOMETIMES SHE FORGETS. Turning to Neil Young ROBIN sang FOUR STRONG WINDS but KAMRAN struggled to remember the REMEMBER SONG as PHIL neatly sidestepped Dom to sing his own PIGGYBACK BLUES before CARL had us all chuckling with THE BLACKSMITH AND THE TOFFEE MAKER. Still PAUL was asking for A LITTLE HELP FROM MY FRIENDS and DOM told us I WANNA SEE THE BRIGHT LIGHTS TONIGHT as ED was saying he was definitely not ALL USED UP. Then JAMES sang his promised folk song, WILD MOUNTAINSIDE, but DON & HEATHER were DOWN WHERE THE DRUNKARDS ROLL and KATH & STAN were playing two tunes, JACK ROBINSON & OLD MOLLY OXFORD but BRIAN was down AT THE DARK END OF THE STREET. Coming to a climax GEOFF insisted we TAKE IT TO THE LIMIT while PAUL implored LEAVE HER JOHNNY LEAVE HER before PHIL & DOM warned what happens when an OLD MAN CAME COURTING to close an excellent evening. Top notch!

They came from as far as Tanzania to hear BANJO JOHN open with a nod to his long time girl friend Vera Lynn with WE’LL MEET AGAIN & the WHITE CLIFFS OF DOVER which set KATH & STAN ff to the SWEET SUNNY SOUTH. Incognito JANET told us to tell everyone WE DON’T LIVE HERE NO MORE and CARL exposed the BIG FEAR as SIMON was RAMBLING ROUND. Going back in time ERIC sang YOU SAY from one of Mike Chapman’s Albums, Rainmaker, which made ANN think of THE FOLK SINGER and DON & HEATHER to light up the LITTLE POT STOVE. Then there was the big welcome return of LOTTIE who sang RED IS THE ROSE but for PAUL it was all HARD TRAVELLING and then quite sad with ED and the RED HEADED ANN as it was at the end of CHRIS’ song I WASN’T EXPECTING THAT. We were soon lifted, however, when in walked old friend PETER MYLETT singing I NEVER GO AROUND MIRRORS just as BANJO JOHN launched into GO JOHNNY GO as his own Chick Berry tribute so no wonder SIMON declared I WANNA SING THAT ROCK & ROLL. Approaching the interval CARL turned to Pete Morton for FURTHER before PETER MYLETT returned for CANDLELIGHT AND WINE.

In the Raffle Barry won the Red Wine, Heather won the Chocolates, Hilary won the Handbag, Margaret won the Easter Egg and Eric won the Mother’s Day Plaque as DON & HEATHER opened with FAREWELL TO THE GOLD.  Following on came KATH & STAN with JOHN LOVER and an invitation from PAUL to COME ON UP TO THE HOUSE with LOTTIE & ERIC to meet JOCK STEWART. Next ANN remembered UNCLE TOM COBLEY from a holiday on Dartmoor and the other PETER, briefly home from Africa, GIVE ME A RIDE TO HEAVEN with his indestructible carbon fibre guitar. No wonder ED thought of RICKETY TICKETY TIN and CHRIS & PAUL sailed away with THE TRAWLERMAN and PETER MYLETT was off to see THE DUTCHMAN. Meanwhile SIMON took off after EASY MONEY and LOTTIE sang the anthem song FIELDS OF ATHENRY as KATH & STAN sought THE FORESAKEN MERMAID. Nearing home time PAUL was in need of some CORN BREAD AND BUTTER BEANS as PETER from Africa told us SHE WORE RED DRESSES and CHRIS on the run said I WON’T BE SENDING POSTCARDS FROM PARAGUAY as DON & HEATHER led us singing into the street as we searched for the BLARNEY ROSES to end an excellent evening. Come back soon.

Kicking off St Patrick’s week MARK & JAN gave us the BLUE COCKADE just as ROBIN was leaving old DURHAM TOWN and ALLEN was saying MADAM, I AM A PARLING. Far away BANJO JOHN was at the ALABAMA JUBILEE and JO was away wearing her GALWAY SHAWL as IAN stayed home at the SCARBOROUGH FAIR. With their first Irish offering DON & HEATHER celebrated RECONCILIATION before special guests all the way from Shropshire, TIM & ANN, delighted us with NEVER GOING TO LET HIM GO and SPANISH STEPS playing a normal guitar and one of these new fangled mini acoustic bass guitars with rubber strings. Just in time we got ED back from THE BLACK HILL as ANN had just caught THE TROUT but for PHIL & DOM it seemed to be PERHAPS LOVE. Another welcome newcomer ANDY mad a tribute to OH! MY SWEET CAROLINA as PAUL returned to the Irish theme with DOWN BY THE LAGGAN SIDE but BANJO JOHN was still away MARCHING THROUGH GEORGIA. Coming to the interval JAN sang CALON LAN in Welsh before ALLEN turned to JOSIE and JO turned to the STREETS OF LONDON with big band backing.

In the bumper raffle Ann won the Irish Cream, Phil & Dom won the Irish Dartington Glasses, Joyce won the Irish Bookmark, Ian won the box of Yorkshire Tea and Heather won the ticket to Lymm Folk Club’s next Concert kindly donated by Bernard Cromarty.
Opening the second half MARK D whistled CARRICKFERGUS which set off ED on his anti-THE FIELDS OF ATHENRY song just before TIM & ANN went cruising along the GULF COAST HIGHWAY and IAN took us into the FIELDS OF GOLD. No wonder ANDY said, TALK TO ME OF MENDECINO but for ROBIN it was back to his roots for JOCK O’ HAZELDENE before DON & HEATHER went looking for BLARNEY ROSES. It was then back to the tradition for ANN and LOWLANDS AWAY and PAUL for WHISKEY IN THE JAR before PHIL & DOM came up to date with WILL YOU STILL LOVE ME TOMORROW. For some reason this left ED complaining EVERYBODY’S MAKING IT BIG BUT ME as ALLEN bade FAREWELL TO SICILY and ANDY reached for his SECOND CUP OF COFFEE. Closing in on a big finish DON & HEATHER celebrated the GALWAY GIRL as IAN unveiled his own IAN’S TUNE which brought PHIL & DOM to the station to catch the MIDNIGHT SPECIAL. Reaching a climax TIM & ANN gave us the explosive 455 ROCKET before we settled back in the easy chair with MARK & JAN who insisted YOU AIN’T GOING NOWHERE except home! Magic!

Newsletter No 418 7 March 2017
Another bonzer night in Sale Folk Club tonight with PETE more than WILLING to kick off things followed by KATH & STAN who were by THE BANKS OF ALLAN WATER and ROBIN for who THE BATTLE IS OVER while for ALLEN it was clear that THE WAR DRAGS ON. Then for BRIAN it was reminiscence with AS TIME GOES BY before newcomer PETE took us on a CYCLE RIDE and JAMES would do anything for THE GLORY OF LOVE which JAN & MARK confirmed saying I need you at THE DIMMING OF THE DAY. Then there was a welcome return for TOM with his own BULLETS & CHAMPAGNE followed by PHIL with the 18th century AMAZING GRACE and SIMON with the 20th century PAYDAY before another welcome back for DOMINIC & PHIL who sang a blues about BAD, BAD LEROY BROWN by Jim Croce. No wonder JANET was on the platform looking for ANOTHER TRAIN while for KAMRAN the blues are all the same because the BLUES RUN THE GAME before CARL turned up with his TRAIN SONG (revisited). Back in harness CHARLIE & JONATHAN then serenaded young VALERIE while CHRIS celebrated Ralph McTell’s long time spouse NAOMI before ARTHUR had them all down to FLANAGAN'S APPLE. Coming to the break ED relived THE GRESFORD DISASTER and RICHARD sang his own HUCK'S TUNE followed by DON & HEATHER with FLOWERS ON THE WATER their tribute to his Dad.


In the Raffle the Ice shoe grippers were won by Ed, the Paul O'Grady Autobiography won by Brian, the Room Fragrance Diffuser won by Dolan before the Red Wine went home with Allen. Starting the second half HELEN sang about JENNIFER'S RABBIT before ROBIN sang THE LAST FAREWELL which left PHIL with THE SOUND OF SILENCE. With another of his very original songs PETE was decidedly BONNY UP NORTH while ALLEN found THE WORLD TURNED UPSIDE DOWN and STAN & KATH arrived just BEFORE THEY CLOSE THE MINSTREL SHOW to which JAMES confessed IT HURTS ME TOO and ANN said it was the same with THE PUNCH AND JUDY MAN, gone forever. Also making his mark ED treated us to TIGHTS IN WHITE SATIN by Fred Wedlock which somehow made CARL think of the BATTLE OF TRAFALGAR but left SIMON completely OUT OF TOUCH (Lucinda Williams). No wonder MARK & JAN decidedly washed their hands in MUDDY WATER as RICHARD tried to get to THE HEART OF THE MATTER and BRIAN expostulated, HOW CAN A POOR MAN STAND SUCH TIMES AND LIVE? Heading for a big finish TOM came back with OVER THE HILL by John Martyn and CHRIS went for Dylan’s ZIMMERMAN BLUES and ARTHUR asked with his own IF I COULD REACH OUT which left us with PHIL & DOMINIC and FEELIN' GROOVY. 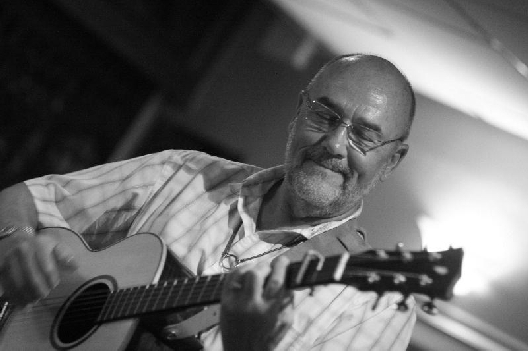