MARK & JAN kicked off what turned out to be an excellent evening with the American response to Charles Robert Darwin WE’LL HUNT HIM DOWN to which ROBIN replied with BREAD AND FISHES but to save argument KATH & STAN sang let’s KEEP ON THE SUNNY SIDE. For JO that was on the ISLE OF INNISFREE and for CHRIS it was on board with THE TRAWLERMAN whereas for CARL it was on the 1710 train now re-titled THE TRICK OF THE TRAIL. Going back 60 years BANJO JOHN took us all up in the TREETOPS with the sparrows and AL then swore allegiance to Ireland with ERIN GO BRAGH as, in his way, did PETE to OXFORD TOWN but for HELEN it was a simple FAREWELL TO TARWATHIE while PAUL just had the BLACK BOTTOM BLUES. With her heart on her sleeve, ANN pleaded LET ME BE YOUR LADY FOR TODAY and similarly lovelorn DON & HEATHER told of the FIRE AND RAIN after a relationship ends to JAN’S answer was to FOLLOW THE HERON HOME and BANJO JOHN recommended we should stay on the SUNNY SIDE OF THE STREET. Hauntingly MARK played the tune ALBATROSS while CHRIS was furiously running up the SPIRAL STAIRCASE leaving CARL to remember WILLIE McBRIDE and JO to describe as SHE MOVED THROUGH THE FAIR.

Another bumper raffle saw Martin win a CD, Margaret win the Wine, Al win the Biscuits, Carl win the Chocolates, Margaret also win some Biscuits, Al also win the Beer and Cath & Helen win Fitness DVDs. Starting up the second half KATH & STAN soother us with BLACK MOUNTAIN LULLABY and PAUL cheered up by SINGING MY BLUES AWAY but AL put some things in perspective with THE WORKER’S SONG. No wonder PETE turned to his favourite STORM RISING to which HELEN replied it FEELS LIKE HOME TO ME before DON & HEATHER led the singing of BLACK CLOTHES for Heather Kenyon for which it is a favourite. ANN then went to the traditional ERISKAY LOVE LILT before ROBIN was off to the STREETS OF NEW YORK and CARL sauntered down PENNY LANE. With another one for the workers AL sang about the GOLD WATCH BLUES but HELEN preferred to TRY FOR THE SUN and PETE said you can get it all DOWN WHERE THE DRUNKARDS ROLL but even with it all some people aren’t satisfied like LUCY JORDAN sung by ANN. Even then they mess it up as in ROBIN’S song about the woman in the LONG BLACK VEIL but in any event CHRIS summed it up with you won’t make OLD BONES causing KATH & STAN to bid THE LAST GOODBYE just in case. On a happier note DON & HEATHER raised the tempo with THE STAR OF THE COUNTY DOWN and PAUL warned us to KEEP YOUR FINGERS OFF IT which for MARK & JAN was the END OF THE LINE and the end of a great night!

It was wonderful to have Janice looking well on the mend and Mick back in harness as GRASSROOTS to host a superb evening of music, verse and song started by them with THE BUTCHER BOY followed by BANJO JOHN with the centuries old I’VE GOT SIXPENCE. No wonder SIMON took himself off IN THE PINES but HILARY went off to South America for a little dance BAILECITO and PAUL said BRING IT WITH YOU WHEN YOU COME. On the other hand JAMES was off down ROUTE 66 where he met with JOHN CONDY as the HIGHWAYMAN so no wonder for JO playing her guitar THE CARNIVAL IS OVER. Away and away GEOFF & SUE were out on the ROLLING SEA and DON & HEATHER were also on the ocean throwing ashes and FLOWERS ON THE WATER after which PAULINE went seasonal with a tribute TO AUTUMN by Keats. ROBIN then turned to a drop of the WATER MELON WINE just as CHRIS & WILF were LEAVING ON A JET PLANE leaving BRIAN to be ALL BY MYSELF. Next HELEN told us THE TREES THEY DO GROW HIGH and DAVE COWE told us about THE WITCH’S SONG & THE CAT whereas CHARLIE & JONATHAN went off to AMERICA as RICHARD returned to his roots as THE LINCOLNSHIRE ROVER and BANJO JOHN broke free as ONE OF THE ROVING KIND to take us to the interval.

A bumper raffle saw Geoff win the wine, Dave win the Gardening Book, Charlie win the biscuits, Helen win the CD, James win the DVD and on his birthday Dave won and shared the Roses Chocolates round the room before GRASSROOTS kicked off again with THE LAST OF THE WIDOWS of the Duck Bill Seam. For GEOFF it was a question of ALL OR NOTHING as it was for SIMON over in ATLANTIC CITY and PAUL who beseeched us to DON’T THINK TWICE IT’S ALRIGHT. Then PAULINE continued her theme with ODE TO A NIGHTINGALE so no wonder CHRIS & WILF came up with LOVE IS ALL AROUND before JOHN rocked us down TOBACCO ROAD. Still on classical guitar music HILARY played SOLEARIS before HELEN went off on THE QUEST and DAVE COWE recited the 21st BIRTHDAY POEM FOR MATTHEW. Reliably RICHARD GRAY sang his own ABANDONED LOVE whereas ROBIN went north of the border to meet JOCK O’HAZELDEAN and SUE was in Salford that DIRTY OLD TOWN. Heading for a big climax JAMES & SIMON banded together for Richard Thompson’s WALL OF DEATH which left Robin, Paul, Don & Heather as FREE SPIRITS to have us all singing Bob Dylan’s WAGON WHEEL to end a superb evening.

Newsletter No 395 13 September 2016
As our digital demon Chris Ross said, it was a small but perfectly formed group of people who had a very pleasant evening. We had the most horrendous thunderstorm about 6.00pm which lasted for ages. Thunder, lightning and rain what probably put people off from going out. Anyway it was worth venturing out and as Paul Riley said the Man City football match was postponed because of the storm but thirteen performers braved the thunder and lightning to entertain the even braver audience. PAUL himself started off with AIKEN DRUM, a piano accordion solo after which KATH & STAN asked WILL THE CIRCLE BE UNBROKEN to which SIMON commented O, DEATH! Next it was wonderful to see the return of GRASSROOTS with Janice looking on the recovery road to sing LITTLE THINGS to which PETER quite rightly replied with FRIENDS. This was followed by PAULINE and a romantic poem about BETTY & JOHNNY and CHRIS with a great song THE HANDS OF JOSEPH before JAN & MARK asked DON’T IT MAKE MY BROWN EYES BLUE? Becoming a more regular performer DIANE then read her own poem GLOBAL WARMING, a dialogue between God and an Angel, which gave ROBIN a PEACEFUL EASY FEELING and caused KATH & STAN to think of two tunes 3AROUND3 and COME TO THE CEILIDH. Rising to the occasion SIMON was next RIDING ON TOP OF THE CAR as PETER set off for THE HOUSE OF THE RISING SUN and GRASSROOTS anticipated those AUTUMN LEAVES. Still in poetic mood PAULINE gave us HENRY KING by Hilaire Belloc to which CHRIS responded IT’S A LONG WAY FROM CLARE TO HERE. Then JAN gave us a Welsh hymn CALON LAN before MARK GAVE US the TALE OF THE CAT just as Don & Heather were passing by the real Spanish place ROBIN sang about LAREDO. Individually MICK then sang his own song SHE BELONGS TO ME as PAUL was hastily forming his floor band including Kate on spoons for CORNBREAD AND BUTTERBEANS.

Starting the second half PETER said we should all TAKE IT EASY and CHRIS suggested we would WEATHER THE STORM which was appropriate for the evening before PAULINE calmed us all down with MARGARET’S CRADLE SONG by William Blake. Then unlikely as it probably was KATH & STAN swore they saw THE MAN IN THE MOON and SIMON reckoned it was probably more LIKE A SONGBIRD THAT HAD FALLEN and little did they know that a day later we would all be LAZING ON A SUNNY AFTERNOON with MARK & JAN. Although still going well ROBIN decided on the LAST FAREWELL as PETER was living his WHOLE LIFE THROUGH while PAUL was trying to fathom Arthur Marshall’s FENCES. More agriculturally KATH & STAN turned to THE HEDGER while SIMON vowed to love for a THOUSAND MORE years as CHRIS also had a premonition of a SUMMER NIGHT. Coming to the end of a great night PAUL pleaded LEAVE HER JOHNNY, LEAVE HER and invited MARK & JAN to give us an appropriate send-off with THE BONNY SHIP, THE DIAMOND which we could all sail away in.

Newsletter No 394 6 September 2016
A rich and varied evening was booted up by the great combination of KAMRAN & BANJO JOHN who asked BILL BAILEY WON'T YOU PLEASE COME HOME to which ED declared I'M A WINNER but as DAVID pointed out there are WINDS OF CHANGE about (Scorpions). It was of no concern to SIMON who confessed to being THE ROVING GAMBLER to which BAZ replied IF ONLY OUR RIVERS RUN FREE but PAULINE was more upbeat with WILLIAM ERNEST HENLEY's 1870s poem INVICTUS appropriately on the eve of the Paralympics. In anticipation of great exploits there JAMES turned to the SUNSHINE OF YOUR SMILE while DIANNE decided to test us with A POP QUIZ which sent ROBIN of through the STREETS OF LONDON. Unsurprisingly Mr Romance BRIAN offered himself as MR WONDERFUL but unimpressed ANN was off seeking the MR PUNCH AND JUDY MAN while ROD declared he was OUT OF TIME (Stones). Finally back after a while ARTHUR sang the BIRD ON A WIRE (dedicated to Richard Neville) as another welcome face CARL told of the exploits of THE LONE BADGER which left KAM & BANJO JOHN to take us to the interval with DR JAZZ.

A chatty break brought the Raffle which saw the Red Wine do home with Alan, the Rosé wine go home with Barry & Chris, the Candle go home with Ann and the Necklace go home to Hilary via Martin before ED asked a serious question, WILL THE TURTLE BE UNBROKEN? Still in traditional mood BAZ sang about PEGGY GORDON before SIMON delighted us with the LIONS AND LAMBS [banjo tune] followed by VIGILANTE MAN. Next we turned to ROBIN who was away with A GYPSY WOMAN (Don Williams) so no wonder BRIAN declared I WANT YOU, I NEED YOU, I LOVE YOU as did the sailors in ANN’S song about THE LORELEI. Recalling a bit hit by The Band ROD next sang THE WEIGHT as DAVID turned to the Beatles WITH A LITTLE HELP FROM MY FRIENDS before CARL was back on his feet for the great favourite BRIGADIER. No wonder JAMES was WILLING as KAMRAN gave us SLIDING DELTA before SIMON sang LODI (John Fogerty). From God’s own country according to Nicola ROBIN led us in singing MINGULAY and for ROD it was ALL OR NOTHING but for DAVID it was a case of IN DREAMS as we headed for the climax of a great night. No wonder ED kicked off with ALL THE GOOD TIMES as JAMES regretted SHE NEVER SPOKE SPANISH TO ME before CARL topped it all with THANKSGIVING by Pete Morton. Class! 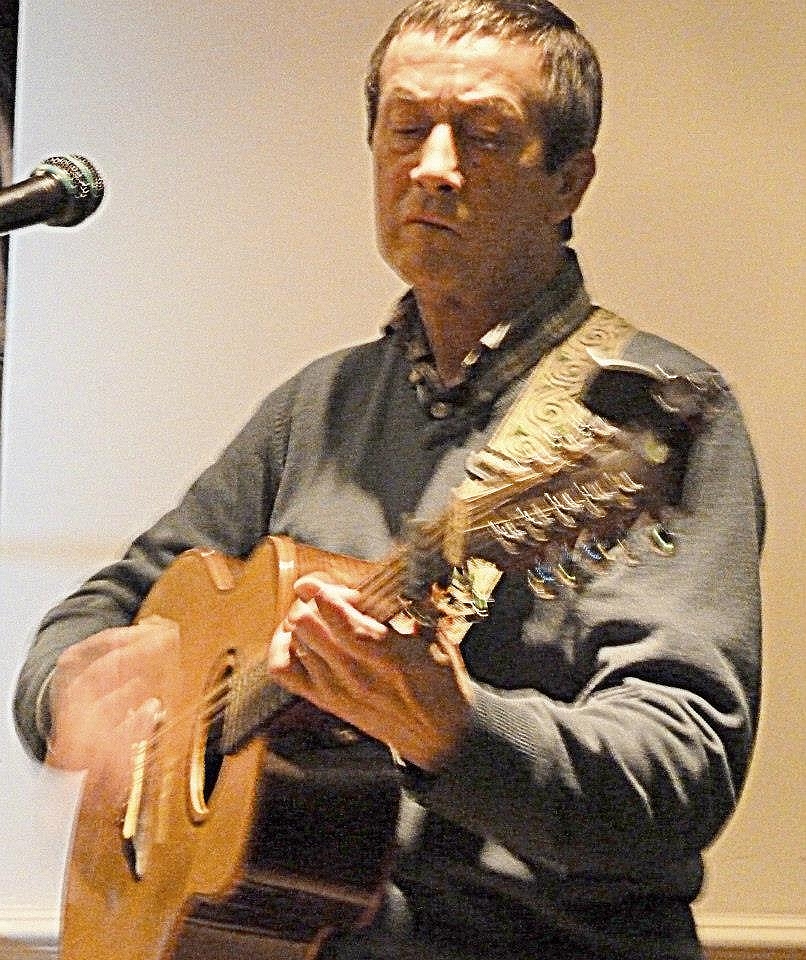