A superb evening well stewarded by Kamran & Pete saw James return to the field of play after a good few weeks so it was appropriate that PETE sang his own BEAT THE DRUM in welcome and PETER BRIDGE proclaimed it a GRANDE AFFAIRE, a big deal to us folk. HELEN then had the URGE FOR GOING (Joni Mitchell) but newcomer STEVE was WATERBOUND and ALLEN was stuck back in time with Mc PHERSON’S LAMENT which KAMRAN summed up nicely with EVERYBODY KNOWS (Leonard Cohen) and PAUL McD replied with WHEELS, take this boy away (Gram Parsons). Still in a heavy mood ED sang his favourite BOB DYLAN’S DREAM and JAMES was still GOING DOWN THE ROAD FEELING BAD and when Simon joined him as RACING DEMON life wasn’t much better with CARMELITA. As we headed for the break CARL was ALL AT SEA with his lady mariner and with HEATHER life was unheralded for SPOT OF THE ANTARCTIC before together DON & HEATHER related how tough it was for Greek migrants to SOUTH AUSTRALIA.

In the interval raffle the bunch of Roses was won by Paul McD, the Bottle of Red Wine went home with Kate and the Chocolate Orange went to Peter before we got going with PETE in his BIG YELLOW TAXI. Then newcomer STEVE sang a SONG FOR MANCHESTER which was totally new to everyone before PETER headed for SIN CITY and ED dealt out some ROUGH JUSTICE (Dave Boulton). On the other hand HELEN was just a WAYFARING STRANGER before ALLEN introduced JOSIE (Donovan) and KAMRAN parodied I FOUGHT THE LAW in his Prorogation version. Thank goodness JAMES was TRAVELLING LIGHT before as RACING DEMON Simon & James questioned HOW CAN YOU KEEP ON MOVING unless you migrate too and CARL looked back and said THANKS FOR THE DAY when rail travel was king. For PAUL McD it was a question of getting lost in the rock and roll to DRIFT AWAY before DON & HEATHER went back in time to THE CONQUISTADORES and HELEN flew off in the EARLY MORNING RAIN (Gordon Lightfoot). PETER BRIDGE preferred to get away to ABILENE (George Hamilton IV) whereas ALLEN mused over PICTURES IN A MAGAZINE and STEVE went falling down drunk with BILLY O’SHEA. Coming to a climax which is always useful RACING DEMON confessed that SOMETIMES SHE FORGETS before PAUL McD had us singing into the street with a PEACEFUL EASY FEELING. Top Night again!!

On this auspicious evening KATH & STAN opened up by tilting at WINDMILLS before just when we thought there was one big birthday for Brian there was two as BANJO JOHN owned up to one as he sneaked in to entertain us with SOMEBODY STOLE MY GAL, however, PAUL McD soon put it all right with YOU’RE STILL THE ONE? Back on track PAUL RILEY insisted PAY ME MY MONEY DOWN and HELEN sang it FOR A DANCER before ALLEN went north for YE JACOBITES. On the other hand ANN still had her eye on MR PUNCH AND JUDY MAN and PETER had a shine for THE GIRL FROM THE HIRING FAIR whereas ED was admired the THE GAMBLER and SIMON told us the story of JOE BOWERS. Fortunately, HILARY was next on hand with some TRADITIONAL WORDS OF WISDOM before BEN gave us some GRAVE WORDS. Returning to the front KATH & STAN went the extra 900 MILES which gave BANJO JOHN the TISHAMINGO BLUES before PAUL McD asked us to TAKE ME AS I AM. Next HELEN reminded us of the old days with the SMUGGLERS SONG before ALLEN challenged WHAT’S IT TO YOU and ANN went for a trip in the SHABBY OLD CABBIE. As we reached out to the interval PETER told us THIS TRAIN IS BOUND FOR GLORY and ED confessed I MISS MY BRAIN THE MOST before out of the blue ROB, a snooker player from the next room, reckoned we are all LIVING ON A PRAYER.
The birthday buffet provided by Ann for husband Brian was greatly enjoyed before the bumper raffle saw the Wine won by Rose, the Chocolates won by Kath and the Toiletries won by Ann. The second half was well started by SIMON and the BAR ROOM GIRLS before BEN introduced his SISTER to which PAUL responded DON’T THINK TWICE. On the other hand HILARY had some MORE WORDS OF WISDOM and KATH & STAN played us 2 TUNES - TWIGLET & BODMIN RIDING before PAUL McD confessed I USED TO LOVE HER. More worryingly HELEN insisted there is a GHOST IN THIS HOUSE to which ALLEN replied that’s LIFE, DON’T YOU KNOW as PETER got the DEEP RIVER BLUES. With a true story ED sung of the GRESFORD DISASTER before SIMON went off DOWN THE ROAD and BEN sang the STRAY AND THE MOON. This nicely allowed KATH & STAN to cheer every up with the BRIGHT MORNING STAR before PAUL RILEY had us all sit DOWN IN THE EASY CHAIR to end a great birthday night.

A very pleasant evening was hosted with alacrity by Ed & Sue who invited PAUL McD to open with a Chas & Dave number, BILLY TYLER which made IAN to DREAN A LITTLE DREAM and ANDY to turn to CHOCOLATE JESUS by Tom Waits. Then HELEN sang the equally tragic ELLEN VANNIN followed by ED with the BRONCHIO-DILATOR BLUES and ANN who insisted on DEFYING GRAVITY. With an eye on the date ALLEN decided the time was right for a song composed in Autumn, NOW WESTLIN’ WINDS, whereas PETE chose to live in the present with BIG GIRL NOW by Bob Dylan and finally PAUL RILEY, who had reached Sea Shanties in his song book, sang ROLL THE OLD CHARIOT ALONG in which we all joined with gusto to end round 1. A second lap saw PAUL McD to comment HEY! NOW YOUR DREAM IS OVER to which IAN replied TRY A LITTLE TENDERNESS (Hoagie Carmichael) followed by ANDY with FOOLISH YOU, which he directed at Ed! Wisely HELEN responded with Joni Mitchell's CIRCLE GAME as inevitably everything comes round again. Not too often hopefully for ED as he sang about the legendary pub crawl in Bradford known as THE MANCHE and with LUCY JORDAN as sung by ANN. Coming to the interval ALLEN played and sang THE GOLD WATCH BLUES and PETE sang ST PAUL’S SONG which left PAUL RILEY with another shanty, BULLY IN ALLEY, to end the round.

The raffle was great fun for Rosalyn and Joyce who both won the first two prizes a bottle of French Red Wine and the bottle of Caramels. Then Ann won the enormous bag of baking apples that Ed and Sue had taken in from their son Kristian's garden before Kevin won the last prize, a bottle of Bucks Fizz, which he seemed very pleased about. He has now gone away on holiday to Germany for a month to stay with his daughter but he will surely be back on his return. Finally we played a trick on Andy made some 'jokingly acid' remarks about the BBQ Kit prize that Ed won! So we wrapped it up again last night and offered it as a booby prize, which of course we fixed for Andy to win!! We also put his happy retirement card in the parcel so he was quite bewildered but saw the funny side when he opened it up.

PAUL McD opened up the second half with I WANNA HOLD YOUR HAND followed by ANDY with DARLING GIRL, directed at Sue for a change she said, before HELEN sang to the DESPERADO. For PAUL and everyone else THE TIMES THEY ARE A CHANGING while IAN had the MISSISSIPPI BLUES and PETE sang Woody Guthrie’s AIN’T GOT NO HOME. Coming to the end of the round ALLEN sang Donovan’s I’M GONNA FOLLOW THE SUN before ED wrapped it up with RED-HEADED ANN.
After a top quality night a big finish loomed and was delivered by PAUL McD singing WHEN WILL I BE LOVED and PEACEFUL EASY FEELING followed by a lovely piece by IAN the name of which we missed and PAUL RILEY with LEAVE HER JOHNNY LEAVE HER. Great stuff!

The feeling of the imminent onset of Autumn didn’t dissuade a good few folk turning up for what was a very varied and entertaining evening. Mark and Jan kicked off the night with Rotterdam and Paul Riley was next with Two Dollar Bill and Andy was Waltzing for Dreamers. Helen lamented her love lost to High Germany and Ian’s first instrumental was Scarborough Fair.
Pete Miners was next with a selection of his “flutter byes”, an art form which can affect people in many ways but mostly resulting in a sea of shaken heads, faces hidden by hands and groans but despite this a good few laughs! Following a short discussion on the merits of champagne flavoured dog toothpaste, Simon gave us a Jimmie Rodgers medley, Hobo’s Meditation and Waiting for a Train and also promised to pass on our best wishes to James for a speedy recover from his crippling prolapsed disc. Chris was next with Ralph McTell’s First Song. Paul McD was here at the Wrong Time, Ed was complaining about the Backleg Miner, Peter Bridge sang the dark song Black Girl, Leadbelly’s interpretation of In the Pines from John before he went sailing on the Sloop John B leaving Pete Roberts to round off the first session with Make You Feel My Love. Mark, in recognition of Neil Armstrong's first step on the Moon half a century ago sang Donovan’s Intergalactic Laxative whilst Ed was on the Verdigris with Tom Paxton and sometimes Iris Dement. Next Peter Bridge was Somewhere Along the Road whilst Helen was in Pastures of Plenty before Andy sang Sunday Morning Coming Down and Jan popped over the border with Ar Lan y Mor (Beside the Sea) complete with subtitles! Ian’s next instrumental was The Nearness of You, then Pete Miners kicked us out with more of his Flutter Byes before Paul Riley took us up to the interval with Wild Bill Jones.

First up after the raffle was Pete Roberts with Knocking on Heavens Door then Chris with Summer Lightening before late arrivals (due to work commitments) Roy and Kim sang a beautiful version of Over My Mountain. Next, in contrast, was Simon with Who’s Gonna Shoe Your Pretty Little Foot, John was a Poor Fool and Paul McD lamented that Boys Cry Too. Helen then sang Dance a Little Closer before more Flutter Byes from Pete Miners, Tequila Sunset from Peter Bridge and Andy who revealed The Beast In Me. Pete Roberts, who should have rounded off the “Pete fest” before Andy but was noticeably absent at the time, then followed on with Goodbye to The Old. Ian’s final contribution was Here There and Everywhere before John modestly sang Oh Lord Its Hard to be Humble followed by Paul Riley with The Cuckoo. Welcome newbies Roy and Kim were next with Deportees followed by Chris with Jez Lowe’s You Won’t Make Old Bones before Simon had us all joining in with Gillian Welch’s By The Mark. Coming to a climax Ed asked us to Treat Me Daughter Decent and Mark and Jan rounded off a brilliant evening by coming to The End Of The Line before wishing everyone a safe journey home. A top night! 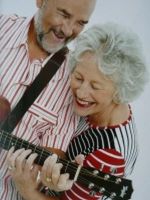