Well done everybody. Well done everybody. The audience far outnumbered the performers but they all rose to the occasion starting with PAUL RILEY who blasted off with CORRINA, CORRINA before telling us DON’T THINK TWICE IT’S ALRIGHT. This propelled KATH & STAN off with the WAYFARING STRANGER and somewhere in the SWEET SUNNY SOUTH at that. PETER reckoned it could have been in ENGLAND 1914 before he declared I’M NOT A ROCK whereas HILARY was solid as with her ONE-LINERS that had us rolling in the aisles. Initially too much levity for JAN & MARK who were OVER THE HILLS AND FAR AWAY but they eventually found LOVE AND HAPPINESS as did PAUL briefly with the BROWN EYED GIRL before signing on the SLOOP JOHN B. Next KATH & STAN chased the MOONSHADOW before chasing after that BANJO PICKIN’ GIRL followed by CARL and the COAL TOWN GIRL. In the deep south of the U.S. of A. PETER developed the FOLSOM PRISON BLUES before escaping on the LAST TRAIN AND RIDE. No wonder HILARY was smiling with her ONE-LINERS before 2 tunes from MARK, WILLAFJORD & SPOOTISKERRY settled everyone down. Moving smoothly to the interval JAN had us FOLLOW THE HERON HOME before singing one from her real home, Wales, LAWR AR LAN Y MOR all of which left PAUL feeling FOREVER YOUNG.
In the interval Raffle the Bottle of Red Wine was won by Gillian, the Orchid won by Ken, Sally won the Child’s Cushion, the Cafetiere Cosy was won by Gillian and the Cosmetics were won by Heather before late arrival RICHARD sang Rudyard Kipling’s IF. Next CARL sang his real folk version I WISH I WAS BACK IN LIVERPOOL while KATH & STAN mused about the fishermen’s heaven in FIDDLER’S GREEN and PETER wanted to ROLL IN MY SWEET BABY’S ARMS. On the other hand JAN & MARK wished for the LEAVING OF LIVERPOOL which left RICHARD to tell us some STORIES OF MY LIFE. Coming to a climax STAN & KATH went back being BABES IN THE WOOD whereas PETER asked LET ME DOWN EASY before MARK & JAN had us charging about the farm yard after the LITTLE RED ROOSTER to end a curiously satisfying evening. Well done everybody!

An interesting group of people arrived at the USC for what was to be an eclectic evening of music and the odd spoken word, in fact some very odd, but funny, spoken words. As there were only a few performers everyone started with two songs and Mark and Jan, with Brexit, climate change and the Tory leadership elections in mind, kicked off with Bad Moon Rising followed by Rotterdam. Paul then entertained us in with Hey Rain and Sugar Pudding followed by Ian with two excellent tunes, Windy and Warm and Baby’s coming home. Andy was next up with A Dollar Short of Happiness and Make You Feel My Love followed by Carl Singing Down the Ages and then a Jez Lowe song The Big Fear featuring the Lone Badger. Peter was up next with some amusing and linguistically contorted “spoonersistic” sayings all in his own inimitable style and was followed by Simon, accompanied by James, with the delightful Salford Sunday then Down to Seeds and Stems. James then gave us Sweet Lorraine in memory of Leon Redbone who recently passed away. Hilary was next with some of her jokes delivered in her unique style and putting us all in stitches and then latecomer Tony sang See You in My Dreams and another song which we can’t bring to mind! Mark and Jan, with a nod to Simon’s first song, then took us up to the interval with Dirty Old Town.
After the raffle Andy sang Love is Our Cross to Bear then Ian treated us to Here,There and Everywhere and Paul, as requested by Rob Redman and accompanied by James and Mark on guitars sang Streets of London. Peter then entertained us some more of his “flutterbys” before Tony was Leaving on a Jet Plane. Heather then read out some very amusing London Underground announcements and a couple of jokes followed by Simon accompanied by James with Amelia Earhart’s Last Flight then James with Shimmy Like my Sister Kate. Jan then sang Dimming of the Day accompanied by her first husband then, despite all evidence to the contrary, Ian insisted that it was Sunny. Tony followed with Just Another Day and Andy was asking Who Knows Where the Time Goes before Simon next sang Sometimes She Forgets and James sang the Beatles’ I Will. Reaching a climax Paul first sang The Irish Blessing leaving Mark and Jan to send everyone home with I Washed My Hands in Muddy Waters ringing in their ears. Another very pleasant evening.

Paul Riley opened the night with ‘Jambalaya’ (on the Bayou) and encouraged everyone to join in before a visitor working over here from Hull, Kevin Young, sang an unaccompanied 'The Dowey Dens of Yarrow' by Sheila McDonald. Allen rose to the occasion with his self-penned 'Wild Eye' while Paul McD sang Bobby Darin's 'Eighteen Yellow Roses' before Hilary came up with a new set of very funny one-liners which left Ed to finish the round with 'Between the Earth & the Sky.' Round 2 saw Paul Riley take over one of Free Spirits’ songs whilst Don & Heather are away, ;The Star of the County Down' before Allen sang his own great song 'The Road to Passchendaele' and Kevin produced a bodhran and sang along with an Irish song 'Dear Old Donegal.' Stepping into the breech Heather Kenyon offered us some very funny jokes before Paul McD sang 'He'll Have to Go' and Ed ended the round with 'All Used Up.' In full swing and as it was nearing the witching hour for Kevin who had to leave for work, we asked him to honour us with two more songs before leaving: Harvey Andrews' 'Margarita' and Cyril Tawney's 'Chicken on a Raft.' Allen then sang Ed Pickford's song about the meagre 'Pound a Week Rise' offered to the miners in the 1970s followed by Pau Riley with the more upbeat 'Bring it With You When You Come.' Heather Kenyon then told us a few more jokes before Paul McD pleaded 'Lord won’t you buy me a Mercedes Benz' and as there was no-one obviously overweight in the audience, Ed sang his awful 'Fat Lady' song directed at an obviously slender Ann! This left Hilary to bring us to the break with more of her entertaining jokes.

In the interval Barrie & Chris won the French Red Wine, Heather won the Perfume, Hilary & Martin won the Gillette Shaving Cream & Balm Gift set and Ann won the pearl necklace and matching earrings which had been kindly donated by Hilary. Unfortunately, nearly everyone left after the raffle, including Kate who had to get back to her granddaughter in Glossop, but there was just a handful of performers left to entertain newcomer Richard, Margaret & Martin in the audience. So Paul Riley started the second half by singing 'Ain't No Pleasing You' followed by Ed with McAlpine's Fusiliers by the Dubliners and Hilary with more of her one-liners before Allen went all trad with Burns' 'Now Westlin Winds' and Paul McD sang 'You Ain't Going Nowhere’ leaving Heather to finish the round with her book of jokes and English Grammar. In view of the pouring rain we decided that each performer would come up one last time before all practiced material ran out so Allen sang his 'Pictures in a Magazine,' Ed sang the traditional folk song 'Chastity Belt' ?? Heather told the last of her jokes, Paul McD asked 'Will You Still Love Me Tomorrow?' and Hilary dug out some old jokes before Paul Riley finished the night accompanied by Paul McD and Allen on guitar and anyone remaining with a musical instrument to play a Medley of Gospel Songs including 'This Little Light of Mine,' We went aboard the ARK at about 10.35 pm to the relief of many who found that, even after all the rain, Bird’s Eye Maple was still Three Ha’pence a Foot...glug glug,glug! What a night!!

With a room full of quality performers and a decent audience KATH & STAN started us off with SHAKE SUGAREE (Elizabeth Cotten) which didn’t deter PAUL RILEY from claiming he had the WORKING MAN’S BLUES (Dylan) nor PAUL McD from seeking A BETTER PLACE (Glen Campbell). Next ERIC was alright because he was with THE OLD GANG (Allen Miller) while ED was determined to play the HOBO (Tom Paxton) leaving ANDY to swear I’LL BE THERE IN THE MORNING (Tony van Zandt) For CHRIS there were NO FRONTIERS (Jimmy McCarthy) and for JAMES life was all COLOURS (Donovan) before as Racing Demon SIMON & JAMES realised PAPER WINGS (Gillian Welch) quickly bring you back down to earth. For KATH & STAN it was a long trip of 10,000 MILES but PAUL R for his crime was JOLIET BOUND whereas PAUL McD was OPEN TO PERSUASION. Chasing the witches ED was off to OLD PENDLE but ERIC preferred to follow MR PUNCH AND JUDY MAN (John Connolly) and ANDY told us how it was IN MY SECRET LIFE (L Cohen) before SIMON & JAMES certainly were not OUT OF TOUCH (Lucinda Williams) as they took us to the break.
In the Interval Raffle Kath won the Bottle of Red Wine, Chris won the Box of Tea bags and the Shaving Cream went to a good cause before JAMES & PAUL told us DON’T THINK TWICE and CHRIS gave us AUTUMN LEAVES before some WORDPLAY from PETER. For KATH & STAN it was a case of follow that BRIGHT MORNING STAR and PAUL asked us to help SING MY BLUES AWAY before PAUL McD took us off to the HOTEL CALIFORNIA and then LYING IN THE ARMS OF MARY. Next a sad moment as ED was SAYING GOODBYE TO THE SEA, another great song by Dave Boulton, followed by ERIC who was on THE BANKS OF NEWFOUNDLAND and ANDY with the sad story of PANCHO AND LEFTY (Willie Nelson) and SIMON & JAMES added SINCE I LEFT YOU BABY. Coming to a climax JAMES revered THE GLORY OF LOVE while PETER had a few CONFESSIONS of his own and KATH & STAN sang there AIN’T NO SWEET MAN going to have one over us but the knockout obviously came when CHRIS sang THE BOXER to end the bout. Top notch! 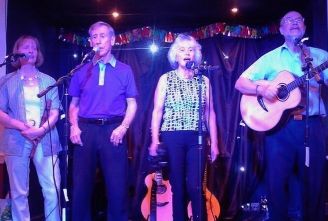