Kicking off on time DON & HEATHER first took us all down to the RED ROSE CAFE where, with his super new concert guitar, EDDIE was all wistful AS TIME GOES BY and MARK & JAN needed us at the DIMMING OF THE DAY. Next BEN sang his own tribute to BELINDA whereas PETER gave us his latest Spoonerisms in FLUTTERBY’S while PAUL McD had time to shine with THE ARC and KATH & STAN were done and pawned with SHAKE SUGAREE. With the sweeter side of Iris Dement ED came up with CHILDHOOD MEMORIES and also for ALLEN it ALL SEEMS SUCH A LONG TIME AGO leaving PAUL RILEY to invite us to WALK RIGHT IN before ANN sang old favourite VAIR ME ORO VAN O. With his own insightful composition CARL sang about a pub, THE BATTLE OF TRAFALGAR, while SIMON was down Steve Earl’s LOW HIGHWAY before JAMES was out in the EARLY MORNING RAIN (Gordon Lightfoot). With a bit of humour and shrewd observation HEATHER gave us SPOT OF THE ANTARTIC by Les Barker before joining forces with DON & PAUL for NO HOPERS, JOKERS & ROGUES followed by MARK’s recorder at the DINGLE REGATTA. In tough times PAUL McD told us NOBODY KNOWS YOU WHEN YOU’RE DOWN AND OUT while in his own song BEN was definitely not DUM as he announced he was TWEEDLE DEE.
There was a bumper interval raffle that saw James win the Wine, Heather K win the Easter Egg, Eddie win the Body Lotion, Jackie win the Roses, Carl win the Belgian Chocolate and Ben win the Mint Creams before ED summed up the shambolic times with the very evasive POLITICIAN’S SONG. Straightforwardly JAN took us off to the VERDANT BRAES OF SKREE to be joined by PETER with MORE FLUTTERBY’S and CARL with the BALLAD OF BILLY KERSHAW while for ALLEN it was a case of THE WAR DRAGS ON. Next PAUL RILEY brought us the BALLAD OF SAMMY’S BAR and EDDIE played O’CAROLAN’S DRAUGHT before KATH & STAN brought us down on a MONDAY MORNING and SIMON was equally downbeat with SEE HOW I MISS YOU but clearly JAMES was a MAN IN LOVE, the 1st track on the Money & Cigarettes Album by Eric Clapton et al. Rising to the climax of an excellent evening PAUL McD encouraged us to DRIFT AWAY and CARL set us singing with COAL TOWN DAYS which DON, HEATHER & PAUL continued with the DIAMANTINA DROVER. What could be better?

Newsletter No 516 19 March 2019
In these times of heightened expectancy DON & HEATHER went back to riding the WESTERN RANGE and BANJO JOHN decided ANYTHING GOES but PAUL RILEY said as long as you DON’T LET THE RAIN COME DOWN and ED commented as long as you don’t need THE FLUSHERS to come in. Meanwhile, ALLEN went off with JOSIE (Donovan) whereas JOHN REED found himself at THE BURNING GATES OF HELL (his own song https://johnreed.bandcamp.com/track/the-burning-gates-of-hell-remix) and CARL was NEARER TO NETTLES (J Lowe). With an old favourite JOHN STEEDMAN was off down COUNTRY ROADS while DON & HEATHER regretted having washed their hands in MUDDY WATER and BANJO JOHN found himself in a tricky romantic situation with JOSHUA, JOSHUA. In dire straits PAUL RILEY was soaking in HEY, RAIN and there was more strife when HEATHER exclaimed I CAN’T FIND MY CAMOUFLAGE NET and ALLEN was having some grief with Police in ERIN GO BRAGH. With another of his own, OCEAN, JOHN REED then inspired CARL to sing his own great song, MAGICAL SKY, and JOHN STEEDMAN to perform his own hilarious send-up of 60’s Pop music, SWAY. Returning to sanity ED took us of to Delabole in Cornwall and the BLACKLEG MINER before the interval Raffle. This saw Heather K win the Bottle of Red Wine, Violet win the Tin of Chocolates, Jill win the Perfume Diffuser, Kate win the Pete King CD and Allen win the Sheridan Smith CD before DON & HEATHER proclaimed these were RARE OULD TIMES and RICHARD said there’s lots of things I’ll miss WHEN I’M GONE so I better do them while I’m here. However, PAUL was a bit mournful with Cyril Tawney ON A MONDAY MORNING but HELEN sang that life SUITS ME WELL whereas ALLEN challenged WHAT’S IT TO YOU and JOHN REED was up in arms about the LAND PIRATES stealing from farmers. With an emotion everyone shared CARL said HERE’S A HEALTH TO THE COMPANY before ED gave us the parody TIGHTS IN WHITE SATIN and JOHN STEEDMAN sang the bittersweet PARADISE by John Prine. Somewhat topically RICHARD sang his own parody the EMPIRE STATE OF CONFUSION before DON & HEATHER started to conclude a fine evening with ROLLING HOME followed by RICHARD with his song about the DIAMOND ROSE climaxed by ED’s BIG BAND leading us all in ALL THE GOOD TIMES. Magic!
Newsletter No 515 12 March 2019

Janice & Mick aka GRASSROOTS hosted St Patrick’s week starting off a most un-ORDINARY DAY as PAUL went off DOWN BY THE LAGANSIDE (Tommy Sands) and KATH & STAN who were fellow WAYFARING STRANGER(s). There was something in the water as PETE ROBERTS sang his own exquisite LOVE SONG leaving ALLEN to tell us TIMES THEY ARE A-CHANGING and ANN to chase after the MR PUNCH AND JUDY MAN. Then with a cautionary tale HEATHER warned of how GUIDE CATS FOR THE BLIND could be a bit tricky before DON & HEATHER went back on theme with the GALWAY GIRL which made PETER BRIDGE want to ROLL IN MY SWEET BABY’S ARMS and reminded PAUL McD of the SUMMER OF ’69. It made JAMES think more of SWEET LORRAINE and SIMON to come up with a TOWER OF SONG which for GRASSROOTS was obviously MEANT TO BE. With two tunes on whistle and violin KATH & STAN came up with WATER OF TYNE & SIR JOHN FENWICK followed by CLAIRE and ROSA’S LOVELY DAUGHTERS and three tunes on banjo from PAUL RILEY which were THE BOYS OF WEXFORD, THE SOUTH WIND and THE SWEETS OF MAY. As we reached the interval PETE ROBERTS definitely knew about BALBRIGGAN FAIR because he wrote it and MIKE COSGRAVE always sings THE TOWN I LOVED SO WELL at this time of year before PAUL McD reminded us of the weather around the corner with HAVE YOU EVER SEEN THE RAIN.
A bumper interval Raffle saw Paul McD take 1st prize with the Box of Biscuits and selection of Chutneys, Heather K won the Bottle of Irish Cream, Pete won the Bottle of Guinness and Ann won the Easter Egg before GRASSROOTS kicked off the second half with SILVER SCREEN. Next ALLEN gave us THE WORKER’S SONG which made PETER BRIDGE think of the HOUSE OF THE RISING SUN and SIMON think of THE STREETS OF BAKERFIELD. For JAMES the old favourite HANDYMAN came to mind before MIKE & CLAIRE went back on theme with FOLLOW THE HERON HOME followed by MICK RYAN’S LAMENT which left DON & HEATHER to celebrate the STAR OF THE COUNTY DOWN. Heading for a big finish to the evening KATH & STAN went off to OWENSBORO before GRASSROOTS said it was QUITTING TIME as PAUL RILEY introduced the BROWN EYED GIRL and PAUL McD had us rocking and rolling into the street with ME AND BOBBY McGEE. Excellent all-round!

This we welcomed back MARK & JAN from OVER THE HILLS AND FAR AWAY while ALLEN had news of a POUND A WEEK RISE with BANJO JOHN being UP A LAZY RIVER and PETE out on the STREETS OF LONDON. Going all folkie PAUL McD treated us to PEGGY GORDON and ED sang the LIVERPOOL LULLABY leaving ANDY to OLD MAN RIVER. Next IAN had an updated version of his SKYLARK and PAUL RILEY sang GOOD AS I’VE BEEN TO YOU off Dylan’s 28th Studio Album. Light relief was then provided by HILARY with some of her hilarious ONE-LINERS followed by HEATHER with AMNESIA by Les Barker. Coming back to the music DON & HEATHER gave us a jazzy version of MACK THE KNIFE whereas SIMON was all realism with TRUE LOVE TRAVELS ON A GRAVEL ROAD so no wonder JAMES sang DON’T THINK TWICE. Than we got a truly memorable rendition of HEARTBREAK HOTEL by EDDIE before BANJO JOHN returned with GEORGIA ON MY MIND and JAN reminded us we were close to St David’s Day by saying We’ll give Praise with MOLIANNWN. Having a good time ANDY sang what a day for a DAYDREAM and MARK played DARK ISLAND on the recorder. Rising to the interval ALLEN sang his nearly a love song NEARLY SONNET 18 and ED gave us JACUZZI JOE THE GIGOLO’s version of it before, for the love of trains, PAUL RILEY sang K.C. MOAN about the one from Kansas City.
In the interval raffle Vic won the Bottle of Red Wine, Andy won the Box of Chocolates and kindly handed them round and round and round, Chris won the Chocolate Orange, Martin won the Chocolate Mints, Hilary won the Wash Bag & Bayliss Soaps leaving Allen to take home the Pancakes and Maple Syrup. Finally 2 tickets to Loreena McKennett at the Bridgewater Hall, kindly donated by Richard in Ripon, were taken up by Kate and Paul for Monday Night. A truly star prize.
No wonder PAUL McD chose to start the second half with WONDERFUL TONIGHT but for IAN it was a case of BABY’S COMING HOME whereas DON & HEATHER had NOTHING TO SHOW FOR IT ALL. Fortunately it was all good for PETE who sang I SHALL BE RELEASED and EDDIE who was off with SALLY but JAMES was off TRAVELLING LIGHT following SIMON down to GREENVILLE. We then needed some more of HILARY’s ONE-LINERS before ED served up some GREASY GRIT GRAVY and GIZZARD GREENS. No wonder ALLEN went back in history in bidding FAREWELL TO SICILY and PAUL McD sang GOODNIGHT IRENE before IAN played THE NEARNESS OF YOU. Coming to the end of great evening DON & HEATHER had us singing RAMBLING BOY and PAUL RILEY did the same with LAST THING ON MY MIND leaving MARK & JAN to close the show with WE’LL HUNT HIM DOWN by Jez Lowe to end on a high. Very satisfying! 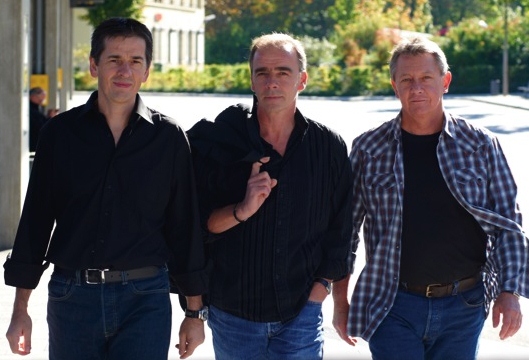