Even though not a Party Night the place was again pleasantly full with over 20 performers rising to the occasion and almost completely ignoring the proximity of Christmas to give the large audience some great entertainment. Kicking off with another great place to be DON & HEATHER opened with RED ROSE CAFE for which BANJO JOHN provided ALEXANDER's RAGTIME BAND and PAUL laid on the BITTER, LAGER, CIDER, ALE & STOUT and we were off. Providing the mood KAMRAN gave us all a BLUE CHRISTMAS while JO sorted the weather with IN THE BLEAK MIDWINTER before GAVIN returned to normal service with the STAR OF THE COUNTY DOWN. The ever romantic BRIAN then changed the mood with THREE TIMES A LADY to which ROBIN gave the LAST FAREWELL and IAN suggested to the MOVING ON SONG. Getting down to the nitty gritty ARTHUR MARSHALL reckoned the true story was summed in his RUDOLPH'S BLUES and equally telling was COLIN's SONG FOR VAN GOGH as was ED's relevant and funny SCARLET RAY GUNS, John Conolly's skit on Scarlet Ribbons of course. Next MERDY picked another John Conolly song FIDDLER's GREEN as CARL celebrated another phenomenon with his MAGICAL SKY but JIM & LYNN couldn't wait to leave MUIRSHEEN DURKIN and head for Americay to dig for gold when they had already found it in Sale Folk Club. ROD then came up with The Stone's DEAD FLOWERS after which PETER wanted to MAKE YOU FEEL MY LOVE before RICHARD GRAY took us off in THE GOOD SHIP ENTERPRISE. GED was then the JELLY ROLL BAKER before JO broke her record and got a second song in with AMAZING GRACE as did BANJO JOHN with a joining in BLUES to complete the first half.

A great raffle bolstered by a wine pack brought by MARTIN saw MERDY get the CAVA, LIN get the belt bag and MARTIN took the chocolates and immediately passed them round.

SIMON opened the second phase with LITTLE BOXES and newcomers RUTH & KATIE were accompanied by RICHARD GRAY for Louden Wainwright's ONE MAN GUY leaving Poet DAVID to mull over the SHIFTING WHISPERING SANDS of the Iraqi war. BRIAN was next WITHOUT A SONG as GAVIN took us to the FIELDS OF ATHENRY and ROD was off on THE SLOOP JOHN B. COLIN was still in serious mood with 1982 about the Falklands war before GED gave us his very funny Dylanesque SPIDER AND THE FLY and PETER urged TAKE IT EASY. Back in serious mood MERDY told us he got LEATHER ON MY SHOES before another mood swing by JIM & LYNN saw us off with the URBAN SPACEMAN, but it was only briefly as CARL became philosophical with Bogle's IF WISHES WERE FISHES we'd all cast nets in the sea. Definitely on the funny side ED boasted of his exciting life to which we all replied SHURRUP YA BLOODY LIAR as PAUL begged O MARY DON'T YOU WEEP and KAMRAN openly confessed I'LL BE GLAD WHEN YOU'RE DEAD YOU RASCAL YOU. In true reflective mood ARTHUR  admitted SOMETIMES I DREAM  and then confessed IF IT WASN'T FOR THE MOUNTAINS which had SIMON heading for the airport and LEAVING ON A JET PLANE before ROBIN, HEATHER & DON aka CONTRABAND hauled him back saying TAK' A DRAM AFORE YE GO, a suitable sentiment to end a great evening before Christmas and New Year. All the best everybody!!!

Within half an hour we thought the place was full and still more managed to squeeze in to break the 70 barrier for the second time in three weeks. ROBIN started in great style with his newly developed picking technique backing his fine singing of BREAD AND FISHES followed by fellow Scot MERDY who treated us to BLACK JACK DAVY. Next KATH, STAN & RUTH sang an excellent version of an old New Year Carol Levy Dew or Levez a Dieu with cittern, whistle and violin which has been anglicised as RESIDUE to which PAUL replied GO TELL IT ON THE MOUNTAIN. Not to be outdone COLIN gave us his own very amusing parody with THE 12 DAYS OF MAN U vs MAN CITY but away from the festivities KAMRAN introduced us to THE CHUMPMAN BLUES after which, following an e-mail rehearsal, normally a cappella JO suddenly became accompanied by DON's guitar for THE SOUND OF SILENCE. She was just PUTTIN' ON THE STYLE next sang JOHN as ANN C set out across THE WELL MOOR before ARTHUR MARSHALL broke out into a HIPPY CHRISTMAS CAROL. Enough of that reckoned ROD with MAGGIE MAY and GED followed suit with TROUBLE IN MIND as did RICHARD KNOTT with his brilliant instrumental version of HEARTBREAK HOTEL. This led GAVIN to reckon CAN'T HELP BUT WONDER WHERE I'M BOUND to which PETE replied DON'T THINK TWICE IT'S ALRIGHT as EDDIE set off with a guitar instrumental of THREE CHRISTMAS TUNES. Next DAVE was on his feet at the GARDEN PARTY but BRIAN was off drinking WHISKY ON A SUNDAY before ROB amazed us when he stood up with his guitar round his neck to sing Johnny Cash's RING OF FIRE accompanied by John Condy's delayed action harmonica. Finally, after we had stopped laughing, we came to THE CLOGGERS - SUE, LYN AND ANN C dancing A WALTZ to ARTHURS's MELODEON to take us up to the buffet and bumper raffle in aid of THE RAINBOW TRUST.

The £83.00 raised was quickly made up to £100.00 by the Club and dispatched the following morning as this is being written with lots of people taking an extra Christmas present home.

Long time no see ALAN GRACE opened the second half with THE CHRISTMAS GOOSE leaving ED to tell us it can all be down to SENIOR MOMENTS as ISOBEL played AWAY IN A MANGER twice. Luckily they were different tunes. PEPPER STREET then took us to THE DUSTY DIAMANTINA before we were regaled by 3 DRUNKEN MAIDENS singing THREE DRUNKEN MAIDENS and DON & HEATHER reminded us of the plight of some people trying for a better life ACROSS THE BORDERLINE. CATHY & JAN then gave a great impersonation of HOT FROGS ON THE LOOSE after which JUDE sang the CHERRY TREE CAROL and MERDY sang A FAVOURITE SONG OF MINE. Then taking us off to OWENSBORO were RUTH, KATH & STAN after which PETE got emotional with MY WHOLE LIFE THROUGH and KAMRAN with RICHARD KNOTT explored the meaning of DITTY WAH DITTY. ARTHUR then took us to DINGLE'S REGATTA, GED wondered about WHEN YOU COME and EDDIE played a CHRISTMAS MEDLEY on the melodeon. ROD then pleaded DON'T LET ME BE MISUNDERSTOOD to which DAVE replied I WALK THE LINE and PAUL told us about THIS TRAIN which left JOHN CONDY to remind us of the REBEL JESUS to send us home with a good thought.

In about 10 minutes the place was full as Ed & SUE brought us to order for BANJO JOHN to start appropriately with AMORE swiftly followed by RUTH, KATH & STAN with JOHN LOVER and DON & HEATHER with IT'S WHAT YOU DO WITH WHAT YOU'VE GOT. JO as next on her feet with BOTH SIDES THE TWEED (Gaughan) and equally wet was COLIN with LET IT RAIN before PETE hit us with HURT (Trent Reznor). ADIEU SWEET LOVELY NANCY cooed ROB next and CHRIS GILL felt the same about LILY OF THE WEST before IAN BRUCE brought s back to earth with his WET WEATHER GEAR. It was then nice to welcome ANN C with SING JOHN BALL before GED warned us of CARELESS LOVE and ZOE was equally interesting about HOLDING DOWN THE COUCH. With another weather warning PAUL sang LET IT RAIN but without it CARL'S lady mariner really would have been ALL AT SEA and RICHARD GRAY would have been up ELON MOR. Next JIM & LYNN were wondering about NANCY SPAIN but ARTHUR MARSHALL told them WHEN LOVE IS GONE it's gone as surely were the rock stars in the plane crash that caused DON McCLEAN to write AMERICAN PIE next sung by newcomer TONY DARLINGTON and this made KAMRAN think of TROUBLE IN MIND. Finally JOHN CONDY walked on TOM PAINE'S BONES (Gaughan) and ROBIN sang a Chris de Burgh Song to take us to the interval.

A bumper raffle later we hit the ground running with best wishes for the birthday trio and ED particularly dedicated THE OLDEST SWINGER IN TOWN to John Condy before CARL returned us to sanity with his customary elan for BOYS OF BELLY ROW and COLIN took us to MINUS ZERO NO LIMIT. After that PETE ROBERTS was WILLIN' but for GED it was EASY GETTING HARDER EVERY DAY, however we fortunately had RICHARD GRAY who old us WE'RE BIGGER THAN THAT. ROB then gave us a SEA SONG and CHRIS GILL responded with the blues BEFORE YOU ACCUSE ME take a look at yourself which prompted PAUL to take THE LONESOME TRAIN. Next IAN BRUCE was off on a VOYAGE OF DELIGHT which made ANN C think of WHEN I WAS SINGLE and KAMRAN to retort THAT'LL NEVER HAPPEN NO MORE. It obviously touched a nerve for JIM & LYNN who went off in search of some WHISKEY IN THE JAR while KATH, STAN & RUTH were bemoaning the fate of farmers with BLACK WATER on their land to which ZOE responded IF I HAD A BOAT. All this had no er er effect on JOHN CONDY who was off to ATLANTIC CITY as ARTHUR MARSHALL pleaded forgiveness for his sins with a rabble rousing BLESS ME FATHER before DON & HEATHER had us all confessing to be both SAINTS AND SINNERS as we hit the road home after another great night. 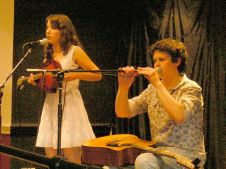