Musical direction leans mainly towards their own arrangements of traditional Irish and Scottish music and a mixture of country and cajun along with modern material combined with original songs composed by Tim Flaherty and other band members.
Over the past five years the band have travelled extensively in Europe appearing at music festivals and other venues in Dusseldorf, Bonn, and Cologne, along with festivals in Holland and Belgium, and will spend Christmas 1997 in Dubai before returning to Germany in January
During September 1994 the band toured the USA performing at the famous Leeds Irish Festival in the Catskill Mountains close to New York followed by three weeks touring clubs and theatres in Florida. March '1995 and 1996 found the Boggies returning to the USA for the four day Florida Irish Festivals where they appeared on local and national television, plus an appearance in 1996 at the West Palm Beach Festival near Miami. In 1997 and 1998 the band again played the West Palm Beach Irish festival along with Clearwaters Irish festival.
In August 1995 The Boggies appeared at the Limavady Irish Festival also the Millport Music Festival in Scotland along with many other shows and concerts throughout Britain and have also appeared on a TV show for BBC Television. In August 1997 the band won an award for the best newcomers to the London Irish scene.
The band spent the final two weeks of 1998 in Singapore and returned to Dubai in October followed by two more tours of Holland and Germany before Christmas 2000.The Marriott Grande hotel in Moscow was the unusual and very exciting venue for this years St Patricks day celebrations 2001, plus several music festivals throughout the City . The band will tour Portugal in July / August, 2001 followed by return trips to Holland , Germany, and Dubai in October, St Patricks day 2002 was spent performing two concerts in Kiev in the Ukraine

What a craicing night with continuous music and song from the Traditional and Modern Irish song books to The Beatles to Bob Dylan to Country Music but all performed impeccably and with great panache. Magic!!! 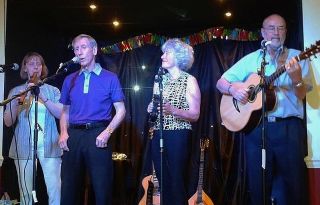