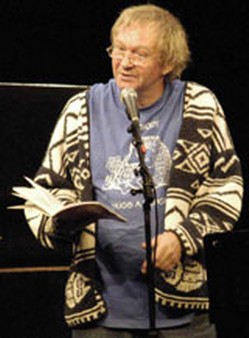 The one and only genuine genius of comic rhyme

Les Barker writes strange poems and comes from originally from Manchester, but he's now Welsh. He was an accountant before he became a professional idiot. He's written 79 books, which sell in large numbers at his gigs because people don't quite believe what they've just heard. His poems have spawned a number of folk heroes: Jason and the Arguments, Cosmo the Fairly Accurate Knife Thrower, Captain Indecisive and Spot of the Antarctic, to name but two.

Les began his career as assistant to Mrs Ackroyd, a small hairy mongrel who lay around in folk clubs, bit people and became famous. Mrs Ackroyd was the only dog ever to own her own record label. Since her sad demise, Les is mainly a solo performer, though he has taken to working with humans from time to time. The Mrs Ackroyd Band gradually evolved from an ever-changing who's who of the folk scene into a tightly knit, well-rehearsed group. The band are now playing as a trio, without Mr Barker, and will be far more tightly knit and well-rehearsed.

Les has several solo albums to his credit: 'Dogologues', An Infinite Number of Occasional Tables', 'A Cardi and Bloke', 'Up the creek without a poodle', 'Arovertherapy' and 'The War on Terrier'. He has travelled the length, breadth and height of Great Britain, as well as Hong Kong, Australia, New Zealand, and - both solo and with the band - the United States and Canada, and he's won assorted prizes for writing and performing in Welsh in the Learners' Pavilion in the National Eisteddfod, performed a couple of times in 'Talwrn Y Beirdd', a fascinating (and to Mr Barker almost incomprehensible) programme on Radio Cymru, and somehow won a Stomp (a Welsh language poetry slam) despite the presence of a number of much better poets.